ABC News Using Outside Group to Fact-Check "This Week" 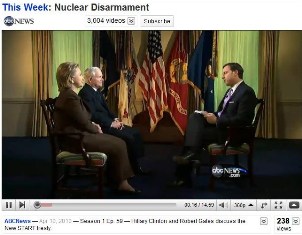 Screenshot shows This Week's interim host Jake Tapper interviewing Secretary of State Hillary Clinton and Secretary of Defense Robert Gates. This episode is the first one fact-checked by PolitiFact in a trial program.

One might think that news programs are always fact-checked.  But, This Week is now enlisting the aid of the fact-checking project PolitiFact on a trial basis to identify any untrue statements. PolitiFact, a project of The St. Petersburg Times, that won the Pulitzer Prize in 2009 for national reporting.

Back in a December 27 blogpost, New York University journalism professor Jay Rosen suggested Sunday morning television news shows fact check their guests.  Rosen wrote that “the Sunday morning talk shows are broken” and stated that they either had to be revised or eliminated. Rosen wrote, “The format beckons (guests on Sunday TV news programs) to evade, deny, elide, demagogue and confuse.”  Rosen added that the polarizing nature of these shows leaves viewers unsure what’s really the truth.

Rosen originally pushed for Meet the Press to adopt fact-checking. He tweeted its executive producer Betsy Fischer that Meet the Press should fact-check its guests and then run the results a few days later online.

Meet the Press didn’t bite, but This Week did.  David Gregory, Meet the Press moderator, said that his show doesn’t need outside fact checkers because viewers can do it on their own, The New York Times reported.

Blogger Mike Riggs wrote April 9 on news site The Daily Caller that fact-checking the morning TV news programs can “only be good for America, and for facts, which have been sorely abused these many years.”

The New York Times wrote, “The fact checking, which started Sunday, stands in stark contrast to the he-said, she-said nature of most television chatfests, even though PolitiFact’s work takes place well after the facts and possible falsehoods are first uttered on TV.”

Some comments on posts about fact-checking shows – including Rosen’s blog and Tapper’s announcement – were hopeful the programs would improve with fact-checking.  Others were left questioning why the programs and hosts aren’t calling out factual errors as they happen.

Jake Tapper took over as host in March and will continue hosting until Christiane Amanpour takes the helm in August.

When Tapper took over the show, he tweeted ” Hey, so I have THIS WEEK for 4 months. We’ll try to make it rock and roll. Tweet me ideas for guests, Roundtablers, issues, q’s, etc.”  Media Bistro reported the tweet stating Tapper is a more active user of social media and non-traditional reporting than many others on news networks.

iMediaEthics has contacted ABC News and will post any response.