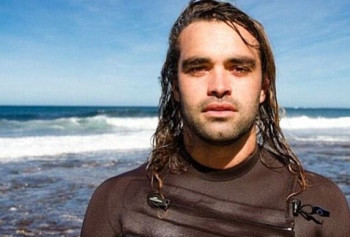 Surfer Otis Carey has filed his second lawsuit against the media over a profile that called him “apeish” and that he found racist.

Australia’s Surfing Life magazine profiled Carey in a March article “Poetry Night With Mermaid Killer.” The article said, according to the Daily Mail,

“With his apeish face and cowering hair-curtains, I expect little more than Cro-Magnon grunts from his mouth. I am caught off guard by the clarity and eloquence of his speech.”

Carey, who is Aboriginal, sued Surfing Life reportedly for $200,000 for defamation and “emotional damages.” Surfing Life and Carey reportedly settled, according to the Sydney Morning Herald. Wade Davis, the editor for Surfing Life, told iMediaEthics by e-mail “Unfortunately due to legal restrictions we cannot comment.”

Simon Maxwell, Carey’s lawyer, confirmed that Carey’s lawsuit against Surfing Life settled but added “the terms are confidential and not to be disclosed.”

Now Carey is suing News Corp-subsidiary Nationwide News, which publishes the Australian Daily Telegraph. The Telegraph had re-published the excerpt from Surfing Life‘s profile calling him “apeish” in its report on the lawsuit against Surfing Life, the Sydney Morning Herald reported.

News Corp. Australia told iMediaEthics “we are not commenting” about the lawsuit.

Carey’s lawyer Simon Maxwell raised three problems with the Surfing Life report, according to the Herald.

Maxwell confirmed to iMediaEthics that Carey is currently suing Nationwide News. “Otis is suing because his reputation has been reduced and diminished by reason of the defamatory statements contained within the article,” he told iMediaEthics by e-mail.

Following Carey’s lawsuit this spring, Surfing Life and the writer of the article, Nathan Myers, apologized.

Surfing Life apologized on March 14 in a statement on its website. The magazine claimed it thought the writer was making a “jibe at the stereotypical surfer” as opposed to a racist remark. It said that when the editors realized “the racist connotations,” it “immediately” apologized to Carey’s family.

Surfing Life said “we absolutely abhor racism,” noting that “in the same issue” it gave five free ad pages “to a charity active in remote Indigenous communities.” Further, the magazine said its editor’s mother’s family was from Africa and his father had “Indigenous heritage.”

“We have since amended our digital edition of the magazine, published this apology online and continue to offer our apologies to the Carey family and Indigenous community overall.”

Myers responded to the lawsuit in an “open letter” published on surfing website Inertia.

The open letter has been removed from Inertia and replaced with an editor’s note, which reads:

“Editor’s Note:  The author has chosen to remove this post from The Inertia, and has requested to direct readers to his apology note instead. Read it here.”

The now un-published open letter had challenged Carey’s decision to take the matter to court. “The word was a mistake of zero malicious intent. The magazine and the writer apologized profusely. What more do you want besides our jobs, our lives and our history? Is this how you want to be remembered by surfing? The man who killed the magazine?’ he wrote, according to the Mail.

The May 31 apology in its place admits that his article was “offensive.” He claimed he wanted the offensive references “to be highly complimentary.”

He denied that he had been sued for $200,000 but acknowledged being sued. “While Otis did issue court proceedings, he did not claim any amount for damages and reports to the contrary are simply wrong,” he wrote.

Myers wrote, “I want to take this opportunity to bury the hatchet and apologise to Otis through the same audience that received my original article. I thought his surfing and his poetic comments in my movie as part of the Se7en Signs Project were inspirational and I sincerely regret that this could be overshadowed by some ill-chosen expressions on my part. ”