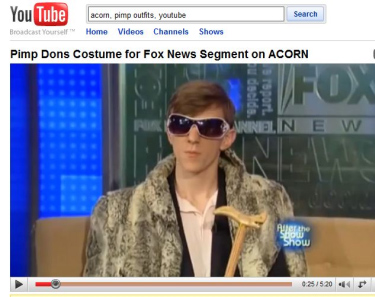 Screen shot from FOX & Friends broadcast of interview with student and ACORN debunker,James O’Keefe. When introduced, O'Keefe failed to correct the error in the FOX introduction by explaining that he didn't wear a pimp outfit while undercover in the ACORN offices.

With the Association of Community Organizations for Reform Now (aka ACORN) closing this week, bloggers have been buzzing about how the media’s coverage (and mis-coverage) affected or caused the organization’s demise.

Complaints over media coverage have ping-ponged between polarized political blogs and news media outlets over the past seven months.

It all started after conservative activists and students, James O’Keefe and Hannah Giles released videos of their undercover infiltration of ACORN offices pretending to be a pimp and prostitute looking for tax help in September of last year–and got it. ACORN rapidly underwent several investigations that included allegations of voter registration fraud, and lost much funding.

The videos show O’Keefe and Giles asking ACORN employees for help in setting up a brothel for underage girls and tax evasion.

ACORN, National Public Radio reports, was founded in 1970 with the aim of “helping low-income Americans take on a host of economic and social issues, including home ownership, affordable housing and voting rights through community-based organizations.”

The New York Times Public Editor Clark Hoyt wrote Sept. 26  that the paper had been criticized for not reporting on ACORN and that the criticism did lie in politics.  Hoyt wrote that director of the Pew Project for Excellence in Journalism Tom Rosenstiel said “The Times has a particular problem with conservatives, especially after its article last year suggesting that John McCain had an extramarital affair. And Republicans earlier this year charged that the paper killed a story about ACORN that would have been a ‘game changer’ in the presidential election — a claim I found to be false.”

As Hoyt wrote in his September column, “Some conservatives think O’Keefe and Giles were doing work that should have been done by the mainstream media. But most news organizations consider such tactics unethical — The Times specifically prohibits reporters from misrepresenting themselves or making secret recordings. And the two were sloppy with facts. One ACORN employee who bragged about killing one of her former husbands said she knew she was being scammed and was playing along. The police said they found her ex-husbands alive.”

Even though news organizations knew the video was edited and that elements of the tape were “unethical,” the footage still spread without critical questioning of what the unedited video footage actually showed–an essential step for the media to have taken in any independent verification or investigation to fact-check the serious allegations.

In coverage of the scandal by The New York Times and most media, O’Keefe is reported to be dressed in a pimp costume as he and Giles ask for help in bringing underage girls to the U.S., setting up a brothel and avoiding tax payments.  The New York Times described O’Keefe’s to be dressed “so outlandishly that he might have been playing in a risque high school play” when he and Giles met with ACORN employees.

It’s easy to see how the media were misled:  While O’Keefe isn’t pictured inside ACORN offices, the video’s opening sequence does show O’Keefe donning an over-the-top pimp costume.  And in an interview with Fox News, co-host Steve Doocy  said O’Keefe is “dressed exactly in the same outfit that he wore in these ACORN offices up and down the eastern seaboard” and O’Keefe never corrects him. See screen shot above. Worse, O’Keefe nods his head while that was being said.

If the media had done their due diligence and investigated the raw footage, they might have discovered that fact earlier.

As early as December, the video’s authenticity was challenged.  An independent report on ACORN by international law firm Proskauer wrote that even though the videos suggested O’Keefe was dressed as a pimp, “he was dressed like a college student – in slacks and a button down shirt.”

Nine days later, The Washington Independent reported Giles saying that O’Keefe wasn’t wearing the costume inside.  The Independent reported Giles saying “We never claimed that he went in with a pimp costume. That was b-roll. It was purely b-roll. He was a pimp, I was a prostitute, and we were walking in front of government buildings to show how the government was whoring out the American people.”

The Brad Blog and FAIR (Fairness and Accuracy in Reporting) called for The New York Times to run a correction, but at the end of February, the BradBlog reported an e-mail exchange with the newspaper’s public editor saying that the newspaper wasn’t incorrect and without a correction to make.

The New York Times reported in March that “In reaction to the videos, the Census Bureau ended its partnership with the organization for this year’s census, the Internal Revenue Service dropped the group from its Voluntary Income Tax Assistance program, and Congress voted to cut off all grants to the organization.”

Later, FAIR wrote in another alert that “If the O’Keefe videos had been treated more skeptically by The Times and other outlets, ACORN would likely be facing a far brighter future. What conservatives believe ACORN is doing has virtually no connection with reality, but has gotten ample exposure in corporate news media; ACORN’s actual record of highly successful advocacy on behalf of poor people gets relatively less media attention.”

ACORN plans to have all offices closed by April 1.

In the column, Hoyt stated that “since the story broke, ACORN’s contributions have dried up, its national staff has been cut by more than three-quarters, services for the poor have been suspended, and chapters have closed or reorganized under other names, even though a district attorney found that Acorn employees in Brooklyn did nothing illegal and a federal judge ruled that Congress acted unconstitutionally in cutting off funding as punishment.”

Hoyt acknowledged areas where The New York Times failed – too many people not working together on ACORN assignments, taking the video at face value, and not covering the story early enough.  Hoyt also wrote “I am satisfied that The Times was wrong on this point, and I have been wrong in defending the paper’s phrasing. Editors say they are considering a correction.”

The point referenced is that O’Keefe was wearing the pimp outfit when he was in ACORN offices. Hoyt writes that “the videos were heavily edited. The sequence of some conversations was changed. Some workers seemed concerned for Giles, one advising her to get legal help. In two cities, ACORN workers called the police. But the most damning words match the transcripts and the audio, and do not seem out of context. ”  The New York Times stands by the rest of its coverage of ACORN.

But blogger Laura Flanders, host of RadioNation on Air America, recently wrote on both The Nation’s Web site  and her own blog,  that The New York Times is too late to be considering a correction.  Flanders wrote that “The Times’ correction ran the same day that the anti-poverty group ACORN called it quits, after a year under attack — and a day after the paper’s public editor wrote that yes indeed, the paper has ‘mistakenly reinforced falsehoods’ from right wing activists against the group.”

She continues writing that “The contemplation-of-a-correction story is less about bad reporting than bias. The Times seems to have considered ACORN guilty from the start.”

“Several articles since September about the troubles of the community organizing group ACORN referred incorrectly or imprecisely to one aspect of videotaped encounters between Acorn workers and two conservative activists that contributed to the group’s problems.

“In the encounters, the activists posed as a prostitute and a pimp and discussed prostitution with the workers. But while footage shot away from the offices shows one activist, James O’Keefe, in a flamboyant pimp costume, there is no indication that he was wearing the costume while talking to the ACORN workers.”

The correction came too late though, bloggers noted.  Blogger Laurie Essig wrote on True/Slant this week, “It was mainstream media that circulated O’Keefe’s work as if it were journalism when they would never circulate Sacha Baron Cohen’s work [Cohen created the satirical chacters Borat, a Kazakh journalist, and Ali G, a hip-hop talk show host] as if it were journalism.  And it was Congress’s willingness to defund ACORN, despite evidence and constitutionality, that destroyed the group.”

MediaMatters reported  that while Breitbart now says he didn’t watch the video before publishing it, “to date, Breitbart has made no effort to correct the record on his site, which helped launch the ACORN sting.” Unlike New York Times readers, they point out Breitbart’s viewers have not been informed “that whole dressed-as-a-pimp thing was bogus.”

The BradBlog also reported last month that Breitbart did, sort of, Feb. 20 at CPAC, an annual conference for conservative activists: “I have to apologize to the nation because, uh, the pimp in the pimp and prostitute video apparently wasn’t dressed like a flamboyant pimp. I am so sorry this nation — uh, for — I don’t know what to say. It, apparently it doesn’t matter anymore.”

StinkyJournalism has written to Andrew Breitbart and will update with any response.