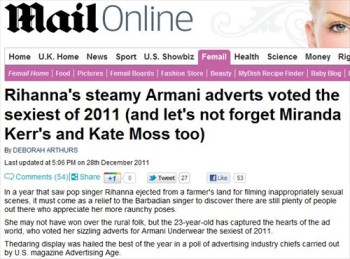 Ad Age says it's not behind the poll or quotes reported by the Daily Mail in late December. (Credit: Daily Mail, screenshot)

Ad Age claims the Daily Mail‘s Dec. 28 report about an Ad Age poll is wrong because Ad Age never created the poll at the center of the Daily Mail’s report.   According to Ad Age’s Dec. 30 story “We Didn’t Name Rihanna’s Armani Ad the Sexiest of the Year, Did We?” (see here), the site “is getting lots of attention for running an ad-world poll that crowned Rihanna’s campaign for Armani the sexiest ads of 2011,” but Ad Age never conducted that poll and said in its Dec. 30 story that the magazine “heard about [the poll] first from the Daily Mail.”

According to Ad Age, the phony poll was first reported by the Daily Mail and then by “The Huffington Post, PopCrush, the Hindustan Times, the International Business Times, Wetpaint, StyleBistro, Fashion Etc. and others,” including Rihanna on Twitter.  The Huffington Post has removed its story on the poll and replaced it with this editor’s note, iMediaEthics notes.  The editor’s note reads:

“This story was based on a Daily Mail report of an Ad Age survey on the sexiest ads of the year. The clothes were barely there, but it turns out the report was even skimpier. Ad Age has posted that ‘it doesn’t exist.’  We have removed the story and apologize for any confusion.”

Ad Age reported in its story denying the poll that the Daily Mail claimed it based its report on TNI Press Ltd’s press release.  That press release reportedly reads in part: “The 23-year-old singer’s daring display was hailed the best of the year in a poll of advertising industry chiefs carried out by U.S. magazine Advertising Age.”

But, according to Ad Age, TNI hasn’t responded to Ad Age’s request for information and the company “appears to lack any web presence at all.”  We wrote to Ad Age’s Nat Ives, who revealed the poll was fake in Ad Age‘s Dec. 30 story, to ask if Ad Age has learned where the poll originated or why Ad Age was credited. Ives told us by e-mail that Ad Age “never did hear back from TNI Media so we’re still not sure what happened.”

According to InfoWorld’s Jan. 3 post, the Daily Mail’s Deborah Arthurs apparently originated the post after being “forwarded a press release by her editor about the story, which was penned by an obscure U.K. agency called TNI Press Ltd.”  However, Arthurs “ran the press release without checking to see if Ad Age did that survey, let alone if the quotes matched the (nonexistent) story,” InfoWorld reported.

InfoWorld reported that Arthurs wrote in an e-mail to InfoWorld confirming the press release came from TNI and that she can’t get in touch with TNI.

As of Jan. 5, Arthurs’ post for the Daily Mail didn’t include a note that the poll and quotes have been denied.

We have written to the Daily Mail asking for further comment, if the Daily Mail will add an update, retraction or corrections, and to confirm Arthurs’ comments to InfoWorld. We will update with any response.

UK site The Drum published a Dec. 29 story about the ad campaign here.  The article reports the quotes and the poll.

“The story is a fake–Ad Age never did any such survey–and we’re trying to find out who’s making up stories about us and apparently distributing them to the media. Do you know where that story came to you from? We’d really like to get in touch with whoever it is and would really appreciate it if you can point us in the right direction.”

Despite this Jan. 2 article, as of Jan. 5, the Drum hasn’t updated its original report about the poll and quotes. We have written to the Drum asking if it will be updated or correcting its original post. We will update with any response.

We heard back from the Drum’s Ishbel MacLeod who let us know the Drum’s story has been updated to reflect Ad Age’s report that the poll isn’t real.  According to an update on the Drum:

“UPDATE: Ad Age has told The Drum that the poll was in fact a hoax. It is seeking to find out who distributed the phoney story.”

According to the “UPDATED” tag at the top of the article, the update was posted Jan. 5 at 5:13 PM.

UK website Metro also published a report on the bogus poll here. The Dec. 29 story, “Rihanna’s raunchy Armani adverts voted most sexy campaign of 2011,” reports on the fake poll and quotes but doesn’t include any update on the poll and quotes being denied by Ad Age. We have written to Metro asking if it will update or correct and will update with any response.

The Hindustan Times wrote in a Dec. 29 article about Rihanna that “Rihanna’s scorching hot advertisement for Armani Underwear has been voted as the sexiest of 2011. The raunchy promo was hailed the best of the year in a poll of advertising industry chiefs carried out by US magazine Advertising Age.”

We have written to the Hindustan Times asking for more information about where its poll report came from and if it will be correcting or updated its report. We will update with any response.

The Times of India ran a Dec. 29 ANI story titled “Rihanna’s sizzling Armani ad voted as the sexiest of 2011.”  Like the Hindustan Times, the article, which was sourced to the Daily Mail, included the line that “The raunchy promo was hailed the best of the year in a poll of advertising industry chiefs carried out by U.S. magazine Advertising Age.”

We have written to the Times of India to ask if it will be updated or correcting its post. We will update with any response.

This article doesn’t mention the Daily Mail. iMediaEthics has written to IBTimes asking about its source for the article and if it will update with any notice concerning the poll and quotes being denied.

UPDATE: 1/6/2012 10:15 AM EST: Updated above to reflect response from the Drum’s Ishbel MacLeod.  The Drum has since updated its original story to include a note that Ad Age says the poll isn’t real.