AFP Doesn't Care If Photojournalists Get Your Name

AFP Doesn’t Care If Photojournalists Get Your Name 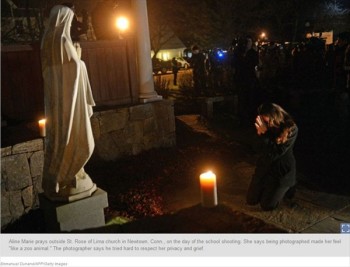 You see it all the time in wire service photography these days – the un-named figures, prominently displayed but not prominently identified. It’s something iMediaEthics has covered in the past, in regards to Occupy Wall Street. A few times.

This time, one of those people spoke up – to NPR’s Coburn Dukehart. Aline Marie, wasn’t happy about being photographed Dec. 14 in a moment of prayer for the victims of the Sandy Hook Elementary School shooting in Newtown, Conn. and sent a message to NPR on Facebook.

Dukehart writes that Marie was deep in the middle her prayer, but then:

“Her mood changed abruptly, she says, when ‘all of a sudden I hear ‘clickclickclickclickclick’ all over the place. And there are people in the bushes, all around me, and they are photographing me, and now I’m pissed. I felt like a zoo animal.'”

The photo was shot by Agence France-Press photographer Emmanuel Dunand – and Dukehart asked him why he didn’t get the name. He gave about the answer you’d expect to NPR. Dukehart wrote:

“He says when he took Marie’s photo, he knew she was suffering, but that he simply didn’t want to bother her. He thought that leaving her alone was the most respectful thing to do.”

But shockingly – he also told NPR that AFP doesn’t require names of subjects when he photographs in public places.

iMediaEthics took that to AFP’s Director of Photography for North America, Mladen Antonov, who gave several reasons for AFP’s puzzling stance on getting names for photographs. He said that getting names for the subjectsd of photographs was not an international standard.

“For journalists and photographers in Asia, in Europe, in Africa – It’s not common to ask for the names,” Antonov said in a phone interview.

That doesn’t mean it’s not important though. In an award-winning piece by iMediaEthics in 2011, a prominent subject in photos after former Pakistani Prime Minister Benazir Bhutto was assassinated in 2007 was a man in a brown jacket – he was at the scene for hours, yet no one ever asked him if he was a supporter, friend or even enemy of Bhutto until iMediaEthics did. It’s impossible to know this information for a caption unless the photographer asks – a point that iMediaEthics raised with Antonov. He said that other factors — media hostility, time, number of photographs transmitted — could play a role in why the photographer couldn’t get names in the case of Newtown.

“Nowadays, we don’t have any more the deadlines of when the newspapers are closing, this was years ago. Now, any moment is a deadline – because with Internet, with online publications, the change that our clients went through, at any moment is a deadline for us,” Antonov said. “Most photographers are trying to file their photos immediately after they have something they like. We don’t work all day long and then in the evening we sit somewhere and choose what to send to the wire.”

“Can you imagine if everyone approached the woman?” Antonov said.

A common technique in these situations is to carry on nearby taking photos, while keeping an eye on the subject of a previous photo to ask for a name whenever they disengage from what they were doing.

Antonov said he was worried that if he required names in captions from photographers that some would simply make them up – a situation he cited as happening in a Moscow news bureau (though Antonov wouldn’t provide the name of the agency or photographer).

“When you press your photographers to search for a name, some of them, they may come up with the wrong name,” Antonov said. “When they are in the situation to ask, we encourage them to ask … It is not compulsory to have the name. Whenever the photographers can have it, we admire this, we applaud this and we use it, because this adds value to our pictures.”

Antonov said, though, that while having a name can be good in many cases, another reason he shied away was because of “picture kill” requests that would come as a result of people Googling their names and finding the photos – something Antonov said he grants in some cases.

“If the picture doesn’t have a big news value, if the picture is nothing to die about, sometimes I’m willing to satisfy [the request],” Antonov said.

As much as “picture kills” can result from finding names – so, too, can more widespread distribution (and sales) come as a result of including names. The Associated Press’ Santiago Lyon, Vice President and Director of Photography said in a phone interview in July:

“In an ideal world we would have names most of the time or all of the time. We encourage our photographers to be diligent about names and where people are from,” Lyon said. “Regional interest can drive a picture that wouldn’t ordinarily have interest in a region.”

In other words, if the person photographed is from outside the coverage area of the photograph, then you’ve opened up a whole new market for those photographs.

“I will not press a photographer at any price to ask for a name,” Antonov said. “I doubt that AP or Reuters or Getty chief editors will press heavily their photographers.”

It’s a stark policy difference from what AP’s Lyon told iMediaEthics in July:

“In an ideal world, we’d like to have [a name] every time. Is that possible to have it every time? No.” Lyon said. “I think that’s a big mistake – photography is another branch of journalism – being diligent about information gathering is important. Often those approaches will uncover all sorts of information – some of it may be relevant to wider coverage of the issue.”

It highlights a difference in the message coming from editors than from the photographers on the ground.

But Marie, in this case, thinks that she should have been approached.

“… all I am saying is, how about a little respect? Say who you are and get out of the bushes,” Marie told Dukehart.

AFP Doesn’t Care If Photojournalists Get Your Name