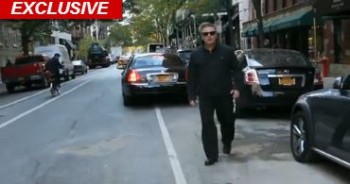 A still from the video of Alec Baldwin calling a photographer a "c**ks**king f*g"(Credit: TMZ, screenshot)

MSNBC suspended Alec Baldwin after his comments yesterday to a New York Post photographer apparently taking pictures of Baldwin, his wife and their child.

Baldwin began hosting a weekly show for the network, Up Late With Alec Baldwin, last month. According to BuzzFeed, the suspension will last “for the next two weeks.”

“Whether the show comes back at all is at issue right now. My producers and I had a very enlightening and well-researched program prepared to air on November 22nd itself, dealing with John Kennedy’s assassination. That show is off the air now. I am deeply apologetic to Ron Fried, who worked extremely hard with me on that show. It’s heartbreaking to me that the show, meant to coincide with the actual anniversary, will not be aired that night. The show is no doubt a work in progress and one that I believe featured some interesting guests and disseminated a good deal of interesting information. But if the show dies, its fate ends up being no different than the vast majority of start-up TV programming, and so be it. We do take a small amount of pride in knowing that we beat CNN in the ratings each of our nights. (I forget who they had on at that time.)”

What got Baldwin in trouble with MSNBC was a video posted on TMZ.

“Get away from my wife and my baby with the camera,” Baldwin says in the video, published by TMZ. Baldwin then called the photographer a “c**ks**king f*g,” according to TMZ’s transcript of the video.

Before the suspension, The Daily Mail and New York Magazine captured screenshots from Baldwin’s Twitter account that appear to have since been deleted. In one, he said a GLAAD spokesperson “informs me that c’sucker is an anti-gay epithet. In which case I apologize and will retire it from my vocabulary.”

In other tweets, he denied that he said “f*g” but instead said “fathead.”

About an hour ago, Baldwin apologized in a statement published on MSNBC’s website. The statement acknowledged his actions were “offensive and unacceptable” and reads:

“I would like to address the comments I made this past week.

“I did not intend to hurt or offend anyone with my choice of words, but clearly I have – and for that I am deeply sorry. Words are important. I understand that, and will choose mine with great care going forward. What I said and did this week, as I was trying to protect my family, was offensive and unacceptable. Behavior like this undermines hard-fought rights that I vigorously support. I understand “Up Late” will be taken off the schedule for tonight and next week.

“I want to apologize to my loyal fans and to my colleagues at msnbc – both for my actions and for distracting from their good work. Again, please accept my apology.”

Prior to the news of the suspension, GLAAD responded to Baldwin’s comments to the photographer:

Mr. Baldwin can’t lend his support for equality on paper, while degrading gay people in practice.

It’s clearly time Mr. Baldwin listens to the calls from so many LGBT people and allies to end this pattern of anti-gay slurs.
— GLAAD (@glaad) November 14, 2013

iMediaEthics has written to MSNBC for comment and will update with any response.

In June, Baldwin said Daily Mail reporter George Stark was a “toxic little queen” after a report about Baldwin and his wife Hilaria at James Gandolfini’s funeral. That anti-gay rant required him to make an earlier apology to  GLADD. Baldwin wrote, “As someone who fights against homophobia, I apologize. ”