Anatomy of an error: Why Florida News Reported 2 Kissimmee police deaths before they happened - iMediaEthics

Anatomy of an error: Why Florida News Reported 2 Kissimmee police deaths before they happened 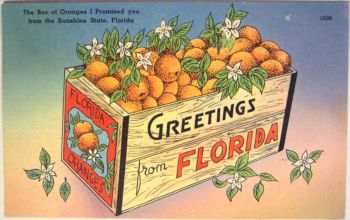 But, only one officer had died at that point. On Aug. 19, at 1:14 AM, the Kissimmee police tweeted, “Officer Matthew Baxter succumbed to his injuries. Officer Sam Howard is in very grave condition.” The second officer was, in fact, alive until the next day.

When a news story breaks in which fatalities might be involved, it is crucial for the media to verify the facts on the ground before reporting. This did not happen on Aug. 18 in Kissimmee, Florida.

How did the five news outlets get caught reporting a police officer was dead, when he was still alive? The Sentinel was the only one of the five outlets to admit the serious error to its readers, both online and in print.

iMediaEthics explored how the mistake happened in this breaking news coverage and spread through the media, and looked to see which outlets transparently disclosed erring.

What the News Outlets Reported and When

The five news outlets — WKMG, WESH, WFTS, WFTV and the Orlando Sentinel — all inaccurately reported the two deaths on the night of Aug. 18.

CBS-affiliate WKMG tweeted Aug. 19 at 12:30 AM that there was a “double fatal shooting,” with the headline of its news story reading, “2 police officers shot, killed in Kissimmee.” There was no transparent correction.

UPDATE: Kissimme police are looking for at least one person in connection with the double fatal shooting https://t.co/SP9oeKyz1K

NBC-affiliate WESH tweeted at 11:37 PM Aug. 18 that both officers were “shot and killed.” Its article has no correction.

#BREAKING #UPDATE | 2 Kissimmee officers shot in Osceola Co. have died. One suspect is in custody. https://t.co/zT5FnLeG6C

Another ABC-affiliate, WFTV, reported both deaths, tweeting at 11:06 PM, “BREAKING: Sources confirm to @WFTV that 2 Kissimmee officers have been killed, 1 suspect in custody.” Its reporter, Samantha Manning, tweeted both police were dead at 11:04 PM.

One suspect is in custody- The two police officers dead are men. https://t.co/aSoL43CGuu

WFTV also published a live blog in which it reported, “Two independent sources have confirmed to Channel 9 that the two Kissimmee police officers shot in the city Friday night have died. The Kissimmee police chief later said Sgt. Sam Howard survived, but is in grave condition.”

What the Florida News Outlets Say

iMediaEthics contacted representatives for all five outlets to ask how the error occurred and about any corrections. Before iMediaEthics contacted any of the outlets, only the Sentinel had acknowledged error, with its online story carrying the following note in large font: “Earlier reports Friday night from official sources indicated that two officers had died.” iMediaEthics hasn’t heard back yet from WKMG or WESH.

iMediaEthics spoke with Sentinel managing editor John Cutter, who told us that the Sentinel did publish the error in print but only in its later print edition. After our inquiry, he realized the Sentinel didn’t run a print correction, he said. The Sentinel then published a correction Aug. 23 in print on its page 2 corrections page. 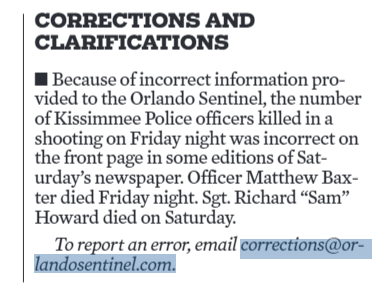 Cutter explained the Sentinel originally held off on reporting that two officers were dead, even though other outlets, Orange County Mayor Teresa Jacobs and anonymous sources were saying two officers died. According to Cutter, the Sentinel finally decide to report that two officers had died with its source as Fred Hawkins, Jr., a Osceola County Commissioner, on-the-record. “That to me was enough attribution,” Cutter said. “In retrospect, it was wrong.”

iMediaEthics asked the Sentinel’s named source, Hawkins, where he heard the news of two deaths that led him to make his comments to the Sentinel. Hawkins told iMediaEthics by e-mail his source was “media reports” and that he told the Sentinel “I only knew what they knew.”

The Sentinel amended its online story around Aug. 19 1:15 AM when the police chief told reporters at a press conference that one officer died and the other was seriously injured, according to Cutter, and added a corrective note to acknowledge a little bit after. “I couldn’t find any outlet in town that didn’t report they were both dead” that night, he added.

“One of the things you worry the most about with the rush to online is making any mistakes,” Cutter said. “You certainly worry about killing anybody off. There were a lot of rumors around this.”

Carolyn Micheli, the vice president for corporate communications and investor relations at WFTS’s parent company, Scripps, told iMediaEthics by e-mail that WFTS “picked up” the inaccurate death story from Orlando ABC-affiliate WFTV. “We fixed the story at 6:34 a.m. Saturday, but the online editor was a substitute and did not realize he needed to call out the correction, and this was not caught by other editors before the second officer also died,” Micheli said. “Labeling a correction is WFTS’s policy, and we regret that didn’t happen in this case.” Yet, iMediaEthics notes, WFTS has not posted a correction on its article days later.

Andy McDill, senior director of communications for Cox Media Group, which owns WFTV, told iMediaEthics by e-mail, “Virtually every media outlet in the market and the state, as well as the Orange County Mayor and the Governor, reported that there were two fatalities.  That was the information we received from various sources at the time and what we believed to be the case from law enforcement sources.  This was breaking news and once word came out that the second officer had not passed but was in extremely grave condition, we revised our reporting immediately. ”

He added, “On another note, we are not the news source for WFTS and are not responsible for their reporting on any news subject matter.”

iMediaEthics notes that the mayor and governor did tweet that both police officers died, but their tweets came after WFTV’s tweets claiming two officers had died. The timeline?

iMediaEthics has written to both the mayor’s and governor’s offices to ask if, like Oceala County Commissioner Hawkins, their tweets were originally based on what they saw reported on the news. A representative for Mayor Jacobs, Carrie Proudfit, the public information officer for Orange County, Florida, told iMediaEthics by e-mail that Jacobs’ tweet was based on other news stories. “It appears the first reports that two officers were killed can be attributed directly to WFTV’s11 p.m.broadcast, specifically with a timestamp of 11:05 p.m. – when the station first reports the two officers had been killed,” Proudfit wrote. “Orange County Mayor Teresa Jacob’s tweet, based upon news reports, was not sent until 11:18 pm. They do not reference her tweet until approx 11:20 p.m. – after already reported the two had died.”

Heartbroken to hear of the loss of these 2 officers. Our prayers are with all of @kissimmeepolice & their loved ones https://t.co/L8aAP1inqK

Anatomy of an error: Why Florida News Reported 2 Kissimmee police deaths before they happened