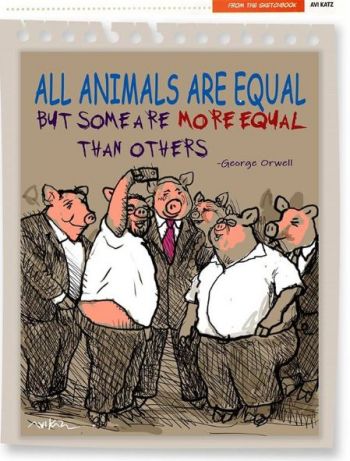 The caption read, “All animals are equal but some are more equal than others.” The Jerusalem Report is a bi-weekly magazine published by the Jerusalem Post.

The image was a parody of a photo of Neyanyahu with politicians after the Israeli government passed a law making Israel the “nation-state of the Jewish people,” the Jewish Telegraphic Agency reported.

Katz told the Associated Press that after seeing the real photo of Netanyahhu, “it just looked like pigs to me, and I very quickly, half-tracing, I just redid the drawing slightly with pig’s faces, it seemed to me so obvious, it was almost as if I was explaining someone else’s joke.”

In an e-mail to iMediaEthics, Katz said “The editor of the Report wrote to me that he is genuinely sorry, I am a genius and he wishes me the best, but the Front Office instructed him to discontinue using my cartoon because people were offended by the Piggie Selfie. I have been doing the back page of the magazine, drawing whatever subject I chose, since 2007. See  www.avikatz.net/report/sketchbook . It appears some people were offended not because of my opposition to the Nationalism Law but because I showed parliamentarians as pigs, which knee-jerk conservatives saw as ‘antisemitic.'”

The Post’s editor Yaakov Katz who provided iMediaEthics with the following statement:

“The Jerusalem Report purchased and ran cartoons by Avi Katz once every two weeks.

“For editorial considerations made by the editor-in-chief, it was decided to stop publishing these cartoons, after a number of them in recent months sparked angry reactions.

“A cartoon showing Israeli leaders with pigs’ heads causes harm and incitement, and has no place in any of our publications.

The Jerusalem Post told Israeli newspaper Haaretz that “Katz is a freelance cartoonist at the Jerusalem Post, and based on editorial considerations, it was decided not to continue the relationship with him.”

“The cartoon’s publication in the fortnightly magazine was met with online support but also anger by many on social media, some of whom suggested the portrayal of Israeli politicians as pigs was antisemitic,” the Guardian reported. “Pigs are considered impure in Judaism.”