Dirty Politics gets even dirtier in Malaysia with doctored photos

And You Thought the Palin Fake Photos were Bad: 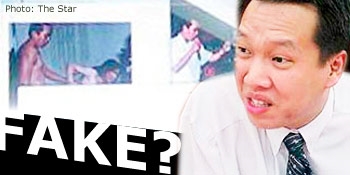 “Tebing Tinggi assemblyman Ong Boon Piow, speaking at a press conference yesterday after lodging a police report on Wednesday, said: “I was shocked when I opened my e-mail to see a nude photo of myself with a woman…

And You Thought the Palin Fake Photos were Bad: