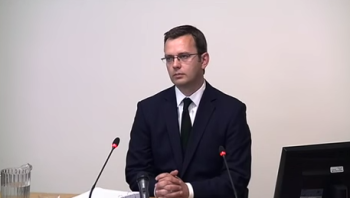 Andy Coulson speaking at the Leveson Inquiry into Press Standards and Practices, which ran from 2011 to 2012. (Credit: YouTube, "TestTransmission1984")

He has pleaded not guilty, the BBC said.

Coulson, the former News of the World editor and former communications director for PM David Cameron, was released from jail last year after serving a portion of his 18-month sentence for phone hacking.

His perjury trial was originally scheduled for earlier this year. Coulson is accused of lying during a 2010 trial when he said he “had absolutely no knowledge” of the News of the World hacking Tommy Sheridan’s phone, as iMediaEthics has writen.