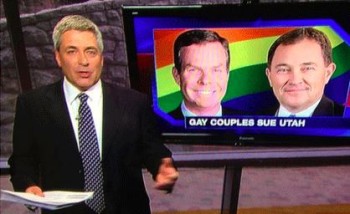 In a March 27 segment, the CBS affiliate showed a picture of Utah’s governor Gary R. Herbert and attorney general with the caption “Gay Couples Sue Utah” referring to lawsuits against the state over its “ban on same-sex marriage.”  But, as Romenesko points out, the pair “are not a gay couple.”

iMediaEthics wrote last month about another big boo-boo on a TV news caption.  A caption on Lexington, Kentucky NBC affiliate Lex18 reported “5 Arrested in Math Lab Bust.”  But, the arrests were made in a METH lab bust NOT a MATH lab. Oops!