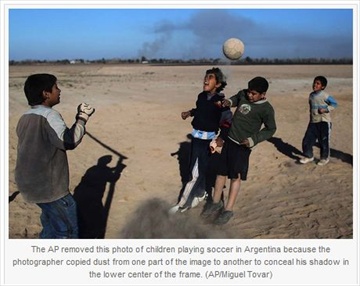 The Associated Press killed images from freelance photographer Miguel Tovar after it was revealed the photographer Photoshopped an image to remove his shadow from the picture. The AP’s photography director, Santiago Lyon, labeled the incident “deliberate and misleading photo manipulation,” according to Poynter.

Poynter reported that this is the image and explained “the photographer cloned dust from one part of the image to another to conceal his shadow:”

In light of the Photoshop, the AP released a memo on its “image manipulation” policy and the incident, Poynter reported.  According to the AP, even though the AP doesn’t believe any other of Tovar’s images were altered, the organization cut ties with him.

The AP explained that the Photoshop was spotted when “An alert photo editor noticed that the pattern on the dust repeated itself in an unlikely way and subsequent investigations revealed the visual fraud.”

According to AP photo policies, the wire service’s photographers cannot “alter or digitally manipulate the content of a photograph in any way.”

iMediaEthics wrote earlier this week about another Photoshopped image killed by the AP. See that story here.

UPDATE: 07/23/2011 6:03 PM EST: Corrected typo misspelling the word ‘photographer’ in the first sentence. Thanks to readers Liz Moore Barrs and Rhonda Smith for pointing out the typo!