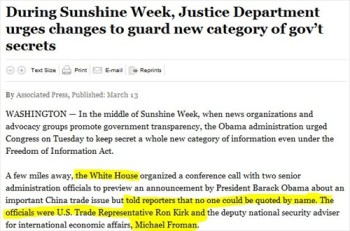 The Associated Press explained in its article, “During Sunshine Week, Justice Department urges changes to guard new category of gov’t secrets,” that “the White House organized a conference call with two senior administration officials to preview an announcement by President Barack Obama about an important China trade issue but told reporters that no one could be quoted by name.”  The Associated Press did not attribute any quotes to Kirk or Froman, but did name the pair.

Yahoo News noted that the Associated Press “pointed out the irony of conducting a ‘background’ conference call–common for the administration” during Sunshine Week.  Sunshine Week. from March 11-17 this year, is “a national initiative to promote a dialogue about the importance of open government and freedom of information.”

“Complaints about the Obama administration’s insistence of background conversations for routine press calls are not new — but the AP’s defiance is a bit unusual. Reasons for keeping calls on background include a desire to avoid being entangled in lawsuits to a PR tactic of not wanting to overshadow remarks made by the president.”

Firedoglake agreed with the Associated Press’s decision and called “background calls” “insiduous.”  In April 2010, White House press secretary at-the-time Robert Gibbs revealed that the Obama administration “offereed the press corps a deal earlier this year to end the use of background sourcing.” Under the arrangement, the White House would be “on the record” for interviews, but the press had to promise to not use “background sourcing,” POLITICO reported at the time.

The Washington Post’s Erik Wemple questioned AP’s decision to name the officials when in a March 12 story the AP cited the anonymous “senior Obama administration officials.”  As Wemple wrote, “there could be some hypocrisy at work here” and noted that the AP’s spokesperson, Paul Colford, wouldn’t “discuss our editorial deliberations.”

We wrote earlier this week when news sites unpublished stories about U.S. President Barack Obama’s daughter’s spring break trip at the request of the White House.