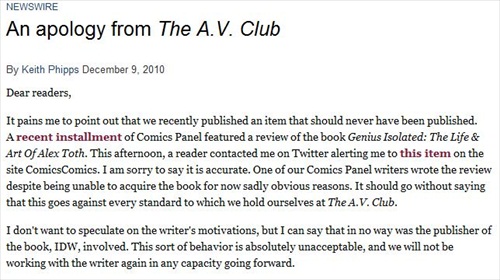 The AV Club apologized for its review of a book that hasn't been finished, much less published yet. (Credit: AV Club)

The A.V. Club’s editor Keith Phipps published an apology to readers Dec. 9 over a book review.  The book review of Genius Isolated: The Life and Art of Alex Toth was written and published but the book itself hasn’t been finished, much less published.

The book is set to be published in mid-March, Comics Comics Magazine reported.

Phipps’ apology to readers noted that the A.V. Club “will not be working with the writer again in any capacity going forward.”  Phipps apologized and addressed the issues in the comments section of Comics Comics as well.

The A.V. Club publishes “pop-culture news, features and interviews” and is owned by The Onion.