Are Photos of Murdered Woman in the Public Interest? Mauritius Editor Ch

Are Photos of Murdered Woman in the Public Interest? Mauritius Editor Charged with Crime Says Yes 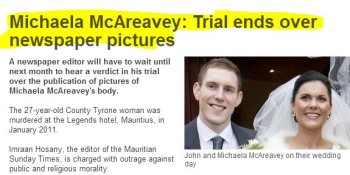 Michaela McAreavey, a schoolteacher from Ireland, was murdered while on her honeymoon in Mauritius with her husband John in 2011.  And making matters worse for her husband, The Sunday Times, a newspaper in Mauritius, published 12 graphic crime scene photographs of her dead, bikini-clad body.

While The Sunday Times issued an apology after many people — including her husband and several Irish politicians — slammed the newspaper, its editor is still defending the photos and his actions as Mauritius prosecutors are pursuing him in court.

According to the Republic of Mauritius’s website, the charge against Hosany is under the government’s criminal code.  The code dictates that:

“Any person who…by an writing, newspaper, pamphlet or other printed matter….commits any outrage against any religion legally established, or against good morals or against public and religious morality (‘la morale publique et religieuse’), shall on conviction be liable to imprisonment for a term not exceeding one year and to a fine not exceeding 10,000 rupees.”

A police constable, Harris Jeewooth, confirmed the paper published photos that he took for the police’s investigation into McAreavey’s murder, and said that the paper should not have received the pictures. Hosany won’t reveal his source.

The prosecution argued the photos were published “for sensationalism” and “a violation of human dignity.”

But Hosany’s lawyer, Akil Bissessur, claimed “it was in the interest of the public that the pictures were published.”

Specifically responding to the charge of outrage against Hosany, Bissessur argued that “publishing photographs of dead bodies cannot be considered as outrageous.”

Bissessur went on, “There is no evidence of complaints recorded as to the outrageous aspects of the said pictures.”

“The decision of the newspaper in Maurititius to publish crime scene photographs, including pictures of Michaela’s body, is an outrageous abuse that cannot be justified in any way.”

McAreavey’s husband criticized the initial apology last year as “a feeble attempt to justify what was wholly unjustifiable” and Irish political leaders, including Taoiseach Enda Kenny, also slammed the newspaper.

As the Irish Independent noted, two people were acquitted of murdering McAreavey the week before the newspaper’s publication.

iMediaEthics discussed the issue of news outlets publishing images of dead bodies in an 2011 investigation into reporting on Benazir Bhutto’s assassination.

The Daily Mail’s lawyer, Michael Kealey, issued a statement that explained what it did wrong and apologizing “unreservedly.”  The newspaper published “stills taken from CCTV footage showing what the newspaper described as an ‘arguing couple.'”

The photos were “presented in such a way as to potentially infer” it was the McAreaveys, but it really was a German couple.

Are Photos of Murdered Woman in the Public Interest? Mauritius Editor Charged with Crime Says Yes