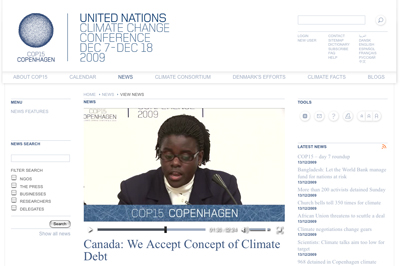 A screen capture of a fake Copenhagen climate meeting website--part of a multi-pronged hoax on Canada's environmental agency.

Environmental hoax-ery is clearly at a high point this year. First, the Yes Men impersonated the United States Chamber of Commerce in a press release and press conference.  Now a yet-unnamed perpetrator has made a similar move against Environment Canada, Canada’s environment agency–this time going to new, exasperatingly confusing lengths in digital impersonation.

This morning a Twitter account purporting to belong to Canada’s Minister for the Environment Jim Prentice tweeted a link to a press release from Environment Canada. The release, emailed out and posted on a precisely copied facsimile of Environment Canada’s website, reports that Canada plans to reverse course and set emissions reductions targets of 40 percent below 1990 levels by 2020 and at least 80 percent by 2050 (Canada’s official plan to reduce emissions by 20 percent from 2006 levels by 2020 has been widely criticized by environmental activists.) It also announces Canada’s  intention to give billions of dollars to “African countries for emissions-reduction strategies and alternative-energy development programs.” “We believe all people will benefit from an equitable climate deal that truly energizes the world economy,” the faux-report states.

To this point, the hoax seems to have transpired in a similar fashion to the Yes Men action against the U.S. Chamber of Commerce. Though unlike the earlier trick, it looks like no major media sites fell for the original Canadian hoax announcement. But this time the fun didn’t stop with a single fake release.

The false release was followed by a new hoax in the form of a false statement condemning the hoax, seemingly also by Environment Canada (not). By all appearances, this response looked like the real deal, coming from an even more precisely copied EC website–“ec-gc.ca” vs. “ec.gc.ca”. But it too is a fake. (Here is a link to the actual Environment Canada website.)

Deepening the rabbit hole even further, the fake response to the fake press release links to a fake Wall Street Journal article reporting the release, and a fake news video on the announcement on a fake Copenhagen web site (this is the real one).  Say that five times fast.

The Canadian Press reports that at least one news source, the Huffington Post was caught by the double hoax, catching the original trick but falling for the second fake press release. Correcting their earlier report, HuffPo writes, “And now, we’ve been punked! This press release, which appears to walk back the original fake press release is ALSO A FAKE. This is a tangled web being woven!”

Interestingly, though this hoax seems both more complicated and more slick than the one against the US Chamber of Commerce, fewer journalists were taken in. (After the Chamber hoax, outlets like Reuters and the New York Times reported the Yes Men’s fake COC press release.)

Many have suggested the Yes Men as possible perpetrators of this hoax because of its similarity to the earlier Chamber of Commerce fake-out (though the pranksters might be wary of inciting another lawsuit.) Ottowa Notebook, a blog from The Globe And Mail writes that “the Yes Men, according to their spokespeople in the United States, are in Copenhagen and they are tweeting about the spoof.”

“Yes, we have heard a bit about this hoax, we are investigating,” Joseph Huff-Hannon, who works with the group, told The Globe in an email. “Word has it that more will be revealed tomorrow at 13:00 pm Copenhagen time. I hear that those responsible can’t speak about it tonight though.”

James Cudmore, writing for CBC News, tracked down the IP address of the hoax press release website, finding that it connected to the Yes Men. “Apparently someone named Morton Subotnils Esq., registered the site on Dec. 13,” he writes.

Helpfully, Morton provided an email address — frank@rtmark.com — and a telephone number: (917) 209-3282. No one responded to emails at that address. And there was no answer at the phone number, either.

Though Google went out and searched the Intertubes for me and reported that (917) 209-3282 was, at least at one-time, associated with a guy named Michael Bonanno, who was one of the star actors in The Yes Men movie.

Though this circumstantially points to the Yes Men, as of yet no group has officially stepped forward to claim responsibility and no one has outed the perpetrators.

We will update if and when the culprits are unmasked.