Does 'light drinking' cause 'no harm' in pregnancy? Times of London corrects story - iMediaEthics

Does ‘light drinking’ cause ‘no harm’ in pregnancy? Times of London corrects story 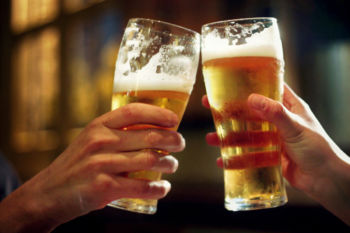 “Light drinking ‘does no harm in pregnancy,'” was the headline of a front-page Times of London story that claimed a “landmark study” indicating there was “‘surprisingly limited’ proof that a little alcohol harms an unborn child.”

However, the Times of London‘s September news headline misreported on the study, a reader flagged. That reader, David Wilson, complained to the press regulator, the Independent Press Standards Organisation, over the Times‘ coverage, noting that the study didn’t say light drinking did “no harm.”

The newspaper explained the error in the headline was made because the copy editor and senior executives who wrote and OKed it “failed to appreciate the subtlety of the academic research which was the subject of the report,” IPSO reported. Further, the Times‘ reporter, Kat Lay, cried foul on the inaccurate headline when she saw it published and before the reader complained. When the reporter complained, the Times changed the headline and published a correction in print and online.

The new headline reads, “No need for guilt over light drinking in pregnancy,” and the top of the online article carries a note reading, “This article was updated on September 14 to take account of a correction.”

The Times’ publisher News UK declined to comment on the IPSO ruling.

The online and print correction read:

“We wrongly suggested in a headline that a recent scientific study had concluded that ‘light drinking does no harm in pregnancy’. While the study found little evidence that light drinking pregnancy is harmful, it also found little evidence that it is safe, and – as we made clear in our report – its authors support guidance advising abstention as a precautionary principle”.

IPSO ruled that the headline was obviously inaccurate and as such, the correction was called for, and IPSO ruled the Times broke the accuracy clause of the IPSO guidelines.

However, IPSO discussed in its ruling whether the correction, which was published on the Times‘ page 34 Corrections and Clarifications column, was prominent enough given that the original error was on the front page. Because the full-front-page article accurately reported on “the nuanced findings of the study in depth” and the correction for the headline was published in an “established correction column,” IPSO ruled the correction the newspaper already had published was sufficient.

Does ‘light drinking’ cause ‘no harm’ in pregnancy? Times of London corrects story