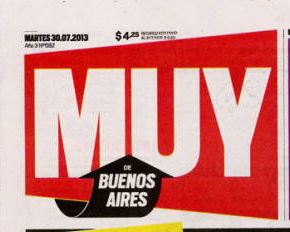 Rawson was shown “surrounded by garbage facilities,” according to Yahoo. The headline for the front page reads, according to a Google translate, “EXCLUSIVE Pictures of Horror: So they found Angeles.”

A copy of the front page is published on La Concept Radio.

The photos were met with much criticism, the Knight Center reported, noting that the girl’s father, a journalists’ group and employees at the newspaper’s publisher were among those who cried foul.

But, Info News reported that Muy‘s editor defended the photos despite the ethical issues at play.  According to a rough Google Translate and information provided by the Journalism Forum of Argentina (FOPEA), Muy’s editor Horacio Convertini said before publishing the photos that “We know that it will open a big debate about whether it is ethical or not to publish but we decided to do it.”

FOPEA called the photos an invasion of Rawson’s privacy and “an unnecessary demonstration of bad taste which only serves to feed the morbidness of a high profile case.” In a June 28 statement on its website, FOPEA said it “condemns” the photos, and noted that the images didn’t “provide any information relevant to the public.”

Further, FOPEA called out Muy for a double-standard in publishing the photos while commenting in its story that the photos “require caution and care.”  The organization’s statement on the photos called for “responsible use of information.”

FOPEA executive director Andrés D´Alessandro told iMediaEthics by email that FOPEA is made up of 360 Argentinean journalists and journalism educators.  D’Alessandro said FOPEA’s purpose is to advocate for “the creation of a space for reflection, dialogue and promoting the quality of journalism.”

FOPEA pointed to its ethics code which calls for good taste and the protection of privacy. And, it noted that there have been a couple of previous ti

mes in the last five years that the images of dead bodies were called into question. According to FOPEA’s D’Alessandro, the code was created in 2006 and is “binding on its members.”  The code “is mandatory for all” in the organization, D’Alessandro added.

The publisher’s union agreed that the photos were “in poor taste and without journalistic value,” the Knight Center added.

iMediaEthics has reached out to Muy publisher Ciudad asking how many photos it published in total, where it got the photos and why it decided to publish the pictures. We’ll update with any response.