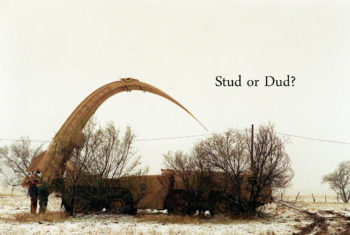 Former NBC News war correspondent Arthur Kent won a libel lawsuit over a 2008 article that called him “Dud Scud” and that he thinks effectively ruined his chances at a political career. While covering the Persian Gulf War in 1990 and 1991, Kent was nicknamed Scud Stud.

The article by former National Post (Canada) columnist Don Martin described Kent, who was fired from NBC News in the 1990s, “as an egotistical, politically naive, arrogant candidate whose campaign was in disarray,” Canadian judge Jo’Anne Strekaf explained, and as such left readers with a negative view of Kent.

[“After only 18 months litigation in U.S. District Court in Los Angeles, I secured a record settlement from NBC, and was invited to rejoin NBC News by the newly installed news division president, Andy Lack (who coincidentally is back in that position now),” Kent explained to iMediaEthics. More on this in a 1994 Los Angeles Times article.]

In addition, the allegations were “exacerbated by the exaggerations and sarcastic tone in the article, by aspects of Mr. Martin’s conduct and by the unfairness to Mr. Kent from Mr. Martin’s failure to provide him with an opportunity to respond prior to publication of the article,” Strekaf ruled.

The National Post article was publishing while Kent was running for office in Canada.

Martin, who now works for CTV, said he did leave a voicemail for Kent seeking comment, but never heard back. However, the National Post‘s parent company “Postmedia later refused to publish a rebuttal that Kent submitted,” the Canadian Press, a Canadian news agency, reported. A former Calgary Herald assistant managing editor Gord Smiley testified last year that the rebuttal wasn’t published because it was “highly critical” of columnist Martin and made allegations about four others.  (The Calgary Herald is also published by Postmedia.)

Martin and Postmedia must pay Kent $150,000. In addition, Postmedia has to pay $50,000 to Kent for leaving the article on its website.

“I’m feeling a measure of vindication from the ruling,” Kent said according to the Canadian Press. “Truth still matters in journalism — and isn’t that good news. Truth, accuracy and balance matter on the Internet and … no genuine journalist will be anything but reassured and encouraged by this court decision.”

“They denied the article was defamatory. Refused to correct errors or publish a rebuttal. And persisted in publishing it on the Internet for nearly five years. Finally, on June 8, 2016, after nearly eight years of litigation, a defamation ruling was awarded by the Court of Queen’s Bench in Calgary, Alberta against the defendants in Arthur Kent v. Postmedia Network Inc. et al and Kent v. Don Martin, Canwest Publishing Inc. et al.”