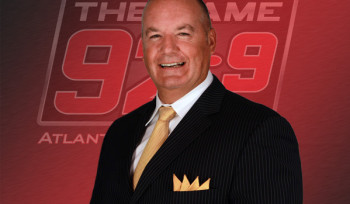 Mike Bell, an Atlanta radio host, was suspended after making a sexist remark about Jessica Mendoza, a baseball analyst for ESPN, the Atlanta Journal Constitution reported.

Bell called Mendoza “T*ts McGee,” (which, the AJC reminds readers, is a reference from the Will Ferrell comedy film Anchorman) on Twitter.

“Yes tell us T*ts McGee when you’re up there hitting the softball you see a lot of 95 mile an hour cutters?” Bell tweeted Oct. 6, according to a screenshot posted by the Atlanta Journal Constitution.

He also commented, “you guys are telling me there isn’t a more qualified baseball player ESPN can use than a softball player?” Mendoza earned Olympic medals for the U.S. softball team.

Initially, Bell stood by his tweets, calling his critics politically correct. Later, he backed down, writing: “I’ve been trending for all the wrong reasons tonight. I apologize for calling Jessica Mendoza T*ts McGee.”

He also apologized on air. “I didn’t get it,” Bell said on air, according to the Atlanta Journal Constitution. “I get it now. There is no place for that kind of stuff on my show. I will be more mindful. I hope I can be a better talk show host and better person. This has been an eye-opening experience.”

92.9 also posted a “statement and apology” from Bell calling his comment “really stupid,” as well as “totally insensitive and demeaning.”

He apologized to his on-air partner, co-workers, and the station’s advertisers, sponsors and partners.

“Moving forward, I can honestly tell you that I fully understand how hurtful the things I say on-air and social media can be. There is no place for that kind of stuff on our show. I will be more mindful and respectful in how I express my opinions and hope I become a better talk show host, but more importantly a better person,” he said. “This has been a real eye-opening experience and I hope I can put the lesson learned from it to good use.”

ESPN told iMediaEthics by e-mail: “Jessica has made terrific contributions to our baseball coverage, but even more importantly, she continues to carry herself with respect and class both on and off camera. And, she has received an overwhelmingly positive response for her work.”

Bell was suspended for three days from 92.9 and will be back on the air Monday. His Twitter account appears to have been removed.

The Atlanta Falcons criticized Bell for his “inappropriate and disappointing” comments, noting that 92.9 is the Falcons’ “flagship station,” Yahoo Sports pointed out.

Mendoza “made baseball history on Tuesday night when she became the first woman to call a nationally televised MLB playoff game,” the Huffington Post noted.