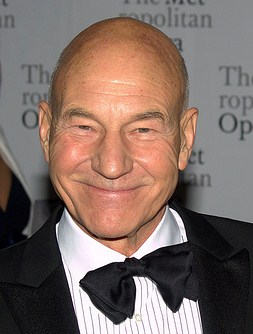 In an apology to readers for errors in a Star Trek story, News.com.au also added that Patrick Stewart, pictured above, "is handsome." (Credit: Flickr, "David_Shankbone")

An Australian news site published a lengthy apology to readers for its “poorly researched” article on Star Trek, which also included a note that the site agrees with readers that actor “Patrick Stewart is a handsome man.”

The apology came after Star Trek fans spotted errors in the original Nov. 2 article on a new Star Trek manual and took to the comments section.

The Nov. 3 apology, signed by technology editor Peter Farquhar, admitted error and focused on three points:  “There were many USS Enterprises, Kirk didn’t captain them all,” and “Patrick Stewart is handsome.”  Stewart is the actor who played Capt. Jean-Luc Picard in Star Trek.

According to the apology, the Nov. 2 story misidentified an Enterprise starship and used the word “hyperspace” incorrectly.   In an “addendum,” News.com.au is “also sorry for any errors in this apology.”

TechDirt noted that apologies as extensive as News.com.au’s are “rarely” seen.

“What struck me is how rarely you see any sort of actual correction of this nature for important stuff that publications actually do get wrong. Usually, they just make the changes to the article, and maybe append a small note at the bottom about how ‘changes were made,’ but rarely do they explain the mistakes that were made, or publish a separate article explaining the errors. And that’s why the original, error-filled stories often get more attention than the corrected versions,” TechDirt explained.

Columbia Journalism Review’s Craig Silverman posted a question-and-answer with Farquhar, the News.com.au editor who bylined the apology.  He explained that he didn’t view the apology “as a correction” but more “an acknowledgment that I’d messed up and that the fans knew more than I ever could.”

“In all honesty, I didn’t like the fact I’d upset the fans in my original story. It was a small piece and they deserved a bit more respect. My goal with the apology was to provide a laugh on a slow news day, nothing more,” Farquhar is quoted as saying.

Regarding the “handsome” Patrick Stewart comment, Farquhar noted that he included it because “it was a fair point” brought up by readers “without any prompting.”