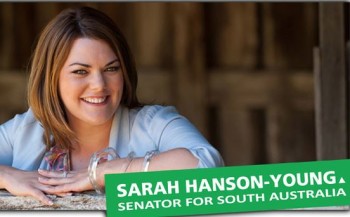 Hanson-Young sued over the 2012 photo of her head “Photoshopped onto the bod of a lingerie-clad model.” It accompanied the article, “Zoo’s Asylum Seeker Bikini Plan,” which called for Hanson-Young to participate in a bikini or lingerie photo shoot in exchange for it letting “the next boatload of asylum seekers” stay at the magazine’s office, Mumbrella said.

Hanson-Young “has been a vocal critic of Australia’s refugee policies and the current government’s protocol of turning back the boats of those seeking asylum in Australia,” Mashable reported.

Hanson-Young argued the  photo was defamatory because it made her look like “a joke,” “not a serious person,” and “justifiably exposed to ridicule,” the Sydney Morning Herald reported.

Zoo Weekly is owned by Bauer Media. iMediaEthics is writing to Zoo Weekly.

Zoo have had to apologise for their smutty & sexist portrayal of me in their men's mag. I'm thrilled the fight is won pic.twitter.com/T2rWTDJ7op

After her successful lawsuit, Zoo Weekly apologized, saying “We accept that the article was in poor taste.”

“Senator Hanson-Young has made a significant contribution to asylum seeker policy in this country,” it went on. “We sincerely apologise for any hurt we caused.”

Zoo Weekly‘s apology will run in print in the July 30 print edition, according to Australia’s Ad News.

In a statement on her political party’s website, the Greens, Hanson-Young said she was “pleased” she won her lawsuit.

“Whether it is a smutty men’s magazine or in pages of the daily newspapers, there is no place for the degradation of women and the right of women to have views or opinions,” Hanson-Young said.
“Politicians regularly face adversity however, there comes a time when you have to draw a line in the sand and take a stand against sexism and bigotry. Taking a stand against this issue was one of principle. To be objectified in such a way for my stance on refugees was insulting and more than just ‘poor taste’.”

Further, Hanson-Young added that it is “important” as a politician, woman and mother to stand up against the sexism. She said:

“Women are too often victims of sexism and too often they stay silent on the issue. I believe that it is important that women see their political leaders stand up and call out sexism when they see it.

“As a mother it is a huge concern that my own daughter can Google my name and find images of my face photo shopped onto the body of a near naked women. Young women need to see their female leaders taking a stand against sexism.  My daughter needs to know I did.”