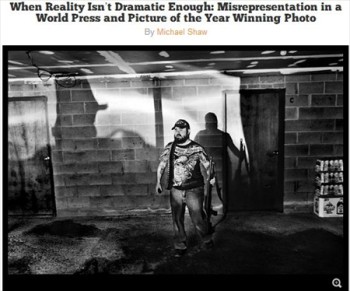 Last month, Bag News Notes, self-described as a “progressive site dedicated to visual politics and the analysis of news images,”  accused Magnum Photo Agency’s photographer Paolo Pellegrin of plagiarism and errors in his award-winning submission to the World Press Photo and the Picture of the Year International contests. The Bag News Notes post, which was published Feb. 22, raised many ethical issues.

It is the photograph of a purported former Marine Corps sniper that sparked the accusations made in Michael Shaw’s article for Bag News Notes. Shaw criticizes Pellegrin’s photograph caption for its inaccuracies, claims that he plagiarized his photographer’s statement and lastly that he staged the photograph.

According to Shaw, Pellegrin’s caption “A former US Marine corps sniper with his weapon” from the series titled The Crescent contains three major errors:

“For any Marine who knows me and sees that image, are they going to believe the photographer and assume that I lied about my Military Occupational Specialty? That makes me look really bad and hurts my integrity.”

Pellegrin met Keller at RIT where all 11 of the Magnum photographers were based for their “month long project” to document Rochester, New York.  Pellegrin was looking to photograph someone with guns and at a shooting range and Brett Carlsen who was assisting Pellegrin and a classmate of Keller’s suggested him because of his firearms collection.

Keller posed for the photograph in question inside his garage. Keller does not live in the Crescent, the very high crime area of Rochester also used as the name of the photo series. Keller describes his home as in a “nice and safe neighborhood.”

After the shoot, Keller recounted how he had asked Pelligrin if he needed his full name or any other information and that Pelligrin had declined.  This struck Keller as strange especially given that Keller was a photojournalism student at RIT and says he was always instructed to get his subjects’ names for the captions. Failing to identify subjects in photographs is an issue iMediaEthics has covered before.

In response to Shaw’s report, Pellegrin issued a statement, published by The National Press Photographers Association.  Pellegrin defended having Keller pose for the photo, noting it “was a portrait, and I’ve never indicated otherwise.” He added that “photojournalists…make portraits all the time.”

Perhaps if Pelligrin had found an inner city youth willing to be photographed with his gun it could be called a portrait.  But that is not what happened.  Pelligrin found a photography student who happened to own a few guns, photographed him in the nice neighborhood where he lived, did not disclose Keller’s connection to the project and pretended the image belonged in the series.

As of March 9, the photo caption on the World Press Photo website reads “former US Marine Corps member with his weapon.”

By email Shaw told iMediaEthics that the site wasn’t “satisfied with the content of Mr. Pellegrin’s responses, but then, it seems the majority of people weren’t.”  He added:

“We felt the discussions generated by the post were extremely constructive addressing not just regarding the particulars of the situation but larger standards of practice.  We also felt the discussions were very efficient, meaning that there were specific places you could go (BagNews, NPPA on Facebook, LensBlog, to name a few) where photographers and citizens were interacting with more well-known figures in the field in a more thoughtful way. What’s typical is amorphous discussions scattered across social media.  (We feel we facilitated this economy by putting Mr. Keller’s story together in one complete post rather than letting it bleed out piecemeal on the internet.)”

Also in his statement, Pellegrin called out Bag News Notes for not contacting him or his photo agency, Magnum, for comment before criticizing them. He wrote:

“Neither Shaw, Steinberg nor Keller ever attempted to contact me…It seems somewhat strange to me that while mounting a purported journalistic high horse they themselves did not follow the basic tenets of fair and professional journalism.”

However, Bag News Notes’ Shaw countered that it didn’t have to contact Pellegrin because “we are critics, not reporters.” Shaw went on:

“Our role and what we do — deemed essential by esteemed colleagues from visual media to academia — is no different from what art critics or television critics or theater critics or film critics do. (I should add, when a film critic perceives a flaw or an inconsistency, he or she doesn’t call up the writer or director for an explanation or an opportunity for rebuttal, he or she deconstructs the content as meticulously and conscientiously as he or she can.)”

Further, Shaw responded that it was providing “subjective analysis” as a “blog. A well-respected one, but a blog nonetheless.”  Shaw added in an email to iMediaEthics that Bag News Notes was “surprised and dismayed” by some of the criticism directed towards its posts. Shaw wrote:

“We do recognize this particular post had element of reporting to it. Still, we believe there are significant differences between journalism and blogging and news reporting and critique, distinctions which we elaborated in each of our response posts. In terms of practices going forward, we will probably be more mindful of the difference between raising questions and making assertions — although the data in this case was so incontrovertible, it wasn’t like Mr. Pellegrin could challenge the facts so much as provide explanations for what he did.

“Regarding the attention to our role, we were surprised and dismayed by the intensity of the ‘blame the messenger’ response. It’s understandable, however. These are difficult times for the industry and also there is an inordinate deference paid to major names and the old guard. Also, new platforms and new technologies are creating more ambiguity when it comes to ethics.  We think part of the intensity also was because a lot of people in the industry do not know us very well.”

Nonetheless, it is iMediaEthics’ contention that Keller deserved an opportunity to respond to Bag News Notes’ accusations before they were published. This was not a case of differing opinion or a few typos or minor fact checks. These were serious accusations. While Keller can talk about his “integrity” being hurt, and we don’t doubt that it may have been, the photographer’s reputation as a professional is also on the line. He deserves the same opportunity to offer any extenuating circumstances that may have contributed to this situation.

Outside of his factual concerns, Keller accused Pellegrin of plagiarizing from the New York Times, noting that Pellegrin’s caption includes several sentences that are copied verbatim from the Times.

Concerning the plagiarism claims, Pellegrin said the text in question was “background [sic] text” and that unlike the captions wasn’t “meant for publication.” He confirmed that he did use the Times as a source for his “factual background sentences.” One has to wonder what other ethical rules might also escape Pellegrin’s understanding when a professional news photographer is unaware that any writing you submit needs to be your own.

The New York Times reported that Rick Shaw, Pictures of the Year International director, said moving forward it will be made more clear what are their standards for accuracy. He is quoted as saying: “It has to be to the level of being published material. Part of that is probably a mistake on our part, in not being diligent about explaining that when a caption or story summary is submitted to POYi, it needs to be to the standard of published work.”

World Press Photo said in a comment to the British Journal of Photography that it’s “currently conducting our own independent fact checking and research into the backgrounds of all prizewinning pictures and stories” to “verify the information provided in the entries” as reported by the NPPA. But, the World Press Photo’s statement noted that it’s “standard procedure for all winners and will include verifying the circumstances of the picture in question.”

iMediaEthics has written to Keller asking: