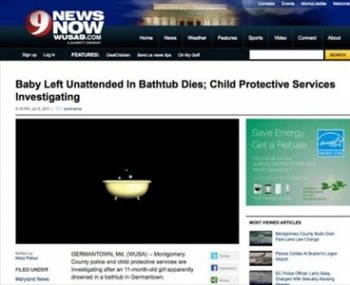 Visual journalist Charles Apple called out Washington, D.C. CBS-affiliate WUSA Channel 9 for bad taste for an illustration on a story about a dead baby. The news outlet used a “stock art” image of a bathtub to accompany its story on a “baby left unattended in bathtub” that died, Apple explained.

Apple called it “horrible — offensive, even” and a “travesty.”

Following Fark’s publication of the story, WUSA has replaced the bathtub image with a picture of the back of an ambulance.

“Not every story needs a visual, folks. Just go without,” Apple reminded.