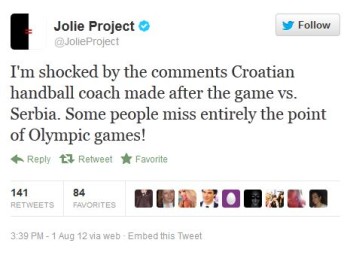 SPLIT, Croatia — Balkan media outlets and an Olympic coach were hoaxed by a fake Twitter account purporting to be actress Angelina Jolie in which she criticized Croatian handball coach Slavko Goluza.

The comments posted on the fake Jolie account came after a statement Goluza made following his team’s win over Serbia at the Olympics, in which he apparently compared the win to the Croatian war of independence that led to the break-up of the former Yugoslavia.  Goluza said:

“Nothing will spoil this day for us. We showed that we are better than Serbia on neutral ground. I can’t help but feel that this victory reminds me of The Storm.”

Ironically, something did spoil the day — his comments. He claimed in a statement that he was referring to a film called The Storm – but “The Storm” was also the name of an operation carried out by Croatian soldiers to claim back territory from Serbs during the war in 1995.

The fake Angelina Jolie Twitter account, which only has about 127,000 comments, certainly took it to be a reference to the military operation tweeting:

“I am shocked by the comments the Croatian handball coach made after the game vs. Serbia. Some people miss entirely the point of the Olympic Games. Nationalism is not to be confused with Patriotism.”

Local media like Croatian news website Index.hr pounced on the story.  Serbian tabloid Kurir used the tweet to attack Goluza branding him a “jerk.”  And Croatian Nova TV’s website asked its readers whether Jolie was right to criticise the coach.

Goluza, who appeared visibly shocked by the storm his comments had produced, tried to say nothing to avoid distracting his team from the competition, but he later admitted he had also not wanted to get into a war of words with the actress. He said he had not referred to the military operation, only the film, but added that he was glad she followed their progress.

Many newspapers praised Jolie for her political engagement in the Balkans and also criticised Goluza. For example, Bosnian daily Dnevni Avaz wrote about how Jolie was furious about Goluza’s statements.