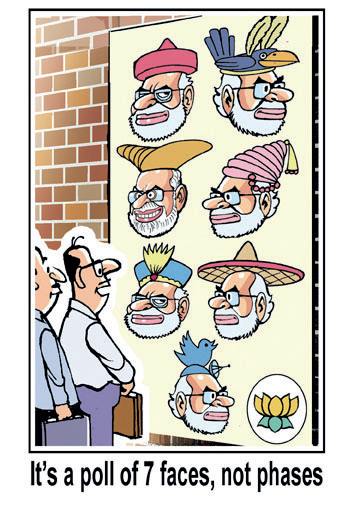 The Bangalore Mirror published a cartoon of Indian Prime Minister Narendra Modi that was in “poor taste.” The Mirror is based in Bengalore, India.

The cartoon depicted Modi “in a derogatory fashion,” the Mirror admitted in a May 2 apology. “This was uncalled for, in poor taste, and a clear oversight on our part editorially to let it go through. Our apologies for the same. This illustration has been taken off from both, our online editions and the e-paper.”

Despite the apology, the cartoon is still available on the Mirror‘s Facebook page and credited to Ajit Ninan. It was captioned, “It’s a poll of 7 faces, not phases,” and depicted Modi with different facial expressions and hats.

iMediaEthics has contacted Ninan via Facebook for his response to the apology over his cartoon. We’ve also contacted the Mirror.

The Mirror is owned by the Times of India Group.