Barbara Walters Apologizes for Conflict in Offering Job, College Help to As 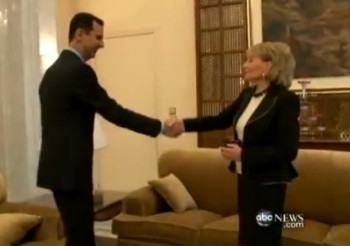 Barbara Walters apologized for pulling strings to get “the daughter of Syria’s UN ambassador” Bashar Jaafari, a CNN internship and a spot at Columbia University, the UK Telegraph reported.  The daughter, Sheherazad Jaafari, also “was a close adviser to Mr Assad” and called Walters her “adopted mother,” according to the Telegraph’s report on e-mails between the two “obtained by a Syrian opposition group.”

Walters interviewed Syrian president Bashar al-Assad in December for ABC News and Media Bistro noted that Jaafari “helped set up” that interview. “Miss Jaafari, whose father Bashar Jaafari has known Walters for around seven years, began dealing with the broadcaster late last year as ABC News lobbied for an interview with Mr Assad,” according to the Telegraph, which also recently published a profile of Jaafari as Assad’s “aide.”

Walters e-mailed the father of the executive producer of CNN’s Piers Morgan program and Columbia Journalism School on Jaafari’s behalf.  “Miss Jaafari did not ultimately get the internship nor the university place,” according to the Telegraph. The New York Times reported that an anonymous source said “no interview was ever granted or even considered” at CNN.

See here the e-mails published on the Telegraph’s website.  In one January 19 e-mail from Walters to Jaafari, Walters wrote:

“I wrote to Piers Morgan and his producer to say how terrific you are and attached your resume. I am not sure if they have an opening. Are you still planning to apply to Columbia School of Journalism? Do you want me to do anything on that? Do let me know your plans when you return from Syria. Be safe. Hugs. Barbara”

In response, Jaafari wrote in part: “Thank you so much.  You can never be a better mom to your adopted child (me).  I love you so much and thanks again. I hope to hear some good news from him.”

The Telegraph reported that Walters issued a statement about the incident and called it a conflict of interest, that reads:

“In the aftermath [of the Assad interview], Ms Jaafari returned to the US and contacted me looking for a job. I told her that was a serious conflict of interest and that we would not hire her. I did offer to mention her to contacts at another media organisation and in academia, though she didn’t get a job or into school. In retrospect, I realise that this created a conflict and I regret that.”