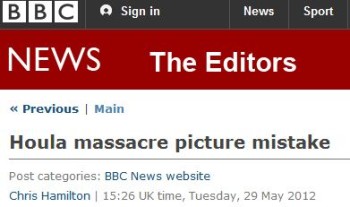 See above a screenshot from the BBC's May 29 apology. (Credit: BBC, screenshot)

The BBC apologized for running the wrong photo with a report on “more than 100 people being massacred in the town of Houla,” Syria.

According to a May 29 Editor’s Blog post by social media editor Chris Hamilton, the BBC got the photo from Twitter, “apparently sourced from activists in Syria.”   He added:

“Efforts were made to track down the original source and, having obtained some information pointing to its veracity, the picture was published, with a disclaimer saying it could not be independently verified.  However, on this occasion, the extent of the checks and the consideration of whether to publish should have been better.

“It was a mistake – rectified by the removal of the image as soon as it was spotted – and we apologise for it.”

The UK Telegraph, which showed a screenshot of the error, noted that the photographer of the 2003 photo, Marco di Lauro, said on Facebook  “What I am really astonished by is that a news organization like the BBC doesn’t check the sources and it’s willing to publish any picture sent it by anyone: activist, citizen journalist or whatever. That’s all.”  See here the original photo on di Lauro’s website.

The story the wrong photo accompanied doesn’t have the photo posted anymore, but no notice has been posted with the story about the error.  We wrote to the BBC asking about this, and for more information about this incident but were referred to the previously mentioned Editor’s Blog post.

In a Press TV report, not directly available through Press TV’s website but rather through a Google Cache, Press TV reported that “Britain’s Foreign and Commonwealth Office (FCO) has announced Foreign Secretary William Hague has expelled Syrian diplomats from London after the BBC was accused of propaganda publishing a years-old photo of dead Iraqi children.”  Similarly, the BBC reported that “Western states have announced they are expelling senior Syrian diplomats following the killing of 108 people in the Houla region of Syria on Friday.”