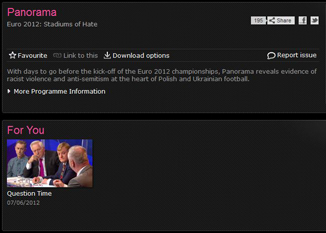 The program, Panorama, aired a segment called “Euro 2012: Stadiums of Hate” that reported on “racism in Ukraine” and included footage of “Polish fans giving Nazi-style salutes and a group of Asian males being viciously beaten at a match in Ukraine,” according to Digital Spy and the Guardian.  Ukraine and Poland are “co-hosts of the 2012 European Championships.”

Ornstein, who said the BBC interviewed him for “Euro 2012: Stadiums of Hate,” claimed the BBC made up “a false horror story about Poland” and “has spread fear, ignorance, prejudice and hatred.” Ornstein also claimed that he suggested the BBC interview “two Israeli footballers at Polish club Wisla Krakow,” but the BBC opted against it because it “didn’t fit their story,” Digital Spy reported.

The BBC, however, defended the program and said “The programme’s producer and reporter deny refusing the offer to interview two Israeli footballers playing in Poland because it did not fit the story.”

Panorama‘s editor Tom Giles also sent a letter to the Irish Independent defending the program. Giles wrote that articles about “Stadiums of Hate” have made “unfounded allegations of us falsely using archive material and claiming it to be contemporary, something which would be a serious breach of our guidelines” and that news outlets failed to contact the program for comment.

We’ve written about criticism of Panorama‘s programs before.  Last December, the BBC apologized for a Panorama documentary that upon review was found by the BBC Trust to be biased.  In July 2011, the BBC paid an Italian company a libel settlement for a Panorama segment that wrongly reported it had “sold blood products infected with deadly diseases.” In June 2011, the BBC Trust called for the BBC to air an apology over a 2008 Panorama program on retailer Primark.  That program broke the BBC’s guidelines on “accuracy and fairness” and contained potentially fake footage. The BBC later returned its Royal Television Society award for that documentary.

We’ve written to the BBC seeking comment and will update with any response.