BBC gets 77 complaints over 'Of Muslim Appearance' Woolwich Attack Quote

BBC gets 77 complaints over ‘Of Muslim Appearance’ Woolwich Attack Quote 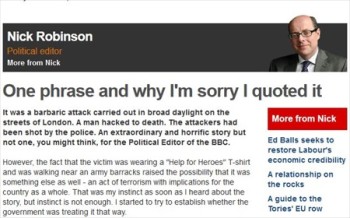 A screenshot of Robinson's apology on the BBC's website. (Credit: BBC, screenshot)

BBC News’ Nick Robinson regretted quoting an unnamed source that the police thought Lee Ribgy’s attackers were “of Muslim appearance.”  Robinson, the BBC News’ political editor, apologized in a lengthy post on the BBC’s website May 23.

Robinson said his “instinct” was that the attack on Rigby was terrorism and that just before his reporting was to air on BBC News at Six, he learned from “a senior Whitehall source that the incident was being treated as a suspected terrorist incident and being taken very seriously indeed.”

Further, that source told Robinson that police said Rigby’s attackers were “‘of Muslim appearance’ and shouting ‘Allahu Akbar,'” which Robinson reported on the BBC.(Video on Mediaite)

BBC publicist Amanda Hearn told iMediaEthics by email that the BBC “received a total of 77 complaints about Nick Robinson’s comment” and said Robinson’s “blog speaks for itself.” In an email to iMediaEthics, Robinson added that there were about “a few dozen” complaints on Twitter, but “the numbers were not important to my decision.”

Robinson defended his reporting, but apologized for the way his reporting could have been “liable to be misinterpreted and to cause offense.” He wrote to iMediaEthics:

“I accurately reported by source. At the time of reporting the significance of the information was not what the attackers looked like but the fact that this was not just a crime but was one motivated by Islamist ideology. To that extent it was helpful and accurate if not in others.”

In a tweet, Robinson rejected reader accusations that he “apologized for being right by saying the attacker was Muslim,” by writing he was actually apologizing for the suggestion “all Muslims look the same.”

@navyvetpc6 No, I seriously did not. I said sorry for quoting a phrase “of Muslim appearance” which suggests all Muslims look the same

In a June 1 post for the Spectator, Robinson expanded on his apology, denying that it was “political correctness,” but instead “courtesy” in response to numerous Twitter complaints of “prejudice that all Muslims look the same.”

Robinson added that he decided to apologize without the input or direction of his boss. Robinson told iMediaEthics that outside of his BBC blog and Specator post, he has no other coment besides “‘keep it in perspective.'”

Earlier this week, iMediaEthics questioned why the Associated Press included descriptions of two of five teenagers killed in a recent Newport Beach, California car crash as Middle Eastern. The ethnicities of other victims weren’t included in the report, yet the AP identified two victims as having “spoke Arabic together when they hung out, which was constantly.”

iMediaEthics also wrote about complaints against UK media outlets for airing or publishing images and video of the alleged attackers of Rigby wielding a blood-covered cleaver.

BBC gets 77 complaints over ‘Of Muslim Appearance’ Woolwich Attack Quote