BBC will track links removed under Google Right to Be Forgotten, calls for

BBC will track links removed under Google Right to Be Forgotten, calls for appeals process 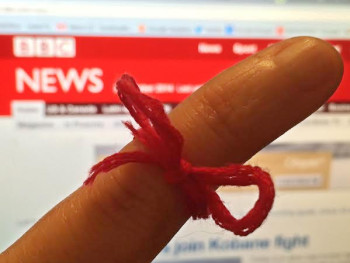 The British Broadcasting Corporation will now list articles Google granted the “right to be forgotten” on its website.

By doing so, the BBC can bring attention to articles that people wanted removed from the search engine.

As iMediaEthics has written, the Right to Be Forgotten grew out of a May European Court of Justice ruling that allows people to request Google and other search engines to remove links to search results that they don’t like. The standard is that the articles are “inadequate, irrelevant or no longer relevant.”  The articles aren’t taken off Google, but when users search for certain names the articles in question are removed from search results.

Google notifies news outlets when an article is removed from search results, but doesn’t say who requested the take down.

Some news outlets are reporting on articles that are taken down, which effectively makes the Right to Be Forgotten powerless as articles people wanted forgotten get more attention. The UK Press Complaints Commission, the print regulator for the UK that has since been replaced by IPSO, ruled in one case last month that it didn’t invade the privacy of the subject of an article who wanted the article “forgotten” to have the article re-reported in light of the ruling.

“The list will not republish the story, or any identifying information. It will instead be a ‘resource for those interested in the debate’, Mr Jordan said,” according to the BBC.

A BBC spokesperson pointed iMediaEthics to this video of Jordan’s comments and said that the BBC’s Oct. 17 report on the matter has the latest on the BBC’s plans for its list.

Jordan also called for a “formal appeal process” to the Google take downs and for Google to let news outlets know who wanted the take down.

As examples of cases where Google removed search results questionably, Jordan pointed to a news report about a trial against Real IRA members that was taken down from search results, even though two of the men were later convicted, the BBC reported. That is an example of a case where the complaint of invasion of privacy could have been overridden by public interest and the BBC’s right to report.

Another article was taken down from search links apparently because someone who commented on the article complained, a decision even the EU admitted was bad.

The Guardian’s James Ball likened this new ability to hide information from search results to censorship.

“The Guardian, like the rest of the media, regularly writes about things people have done which might not be illegal but raise serious political, moral or ethical questions – tax avoidance, for example. These should not be allowed to disappear: to do so is a huge, if indirect, challenge to press freedom. The ruling has created a stopwatch on free expression – our journalism can be found only until someone asks for it to be hidden,” Ball wrote in July.

Google has approved 41.6% of the requests it has received for take downs, as iMediaEthics reported last week.  Google revealed in its Transparency Report that it has received about 1,000 requests daily to take down links since the May ruling.

BBC will track links removed under Google Right to Be Forgotten, calls for appeals process