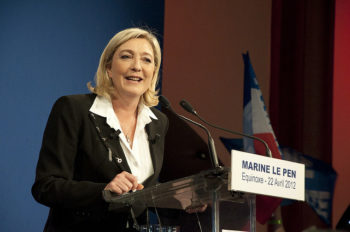 It was OK for the BBC to interview Marine Le Pen on Remembrance Sunday, Nov. 13, the UK broadcast regulator ruled.  Remembrance Day is a holiday to honor those injured or killed in war.

“We assessed 11 complaints that an interview with Marine Le Pen should not have featured in this programme on Remembrance Sunday,” an Ofcom spokesman told the Guardian. “In our view, the interview included appropriate challenges to Marine Le Pen’s views and was justified by the context.”

The BBC declined to comment to iMediaEthics on the OfCom ruling or complaints but pointed iMediaEthics to Marr’s Nov. 13 explanation for the interview, posted below. “Since Donald Trump’s victory, anything seems possible, and in France there asking whether Marine LePen, the highly controversial leader of the right wing nationalistic French National Front will become their next President,” Marr said.

He explained that “if she won that would be a huge and significant moment for Europe. Marine le Pen is hostile to Brussels, she’s against NATO, she’s against free trade and she’s a vehement supporter off Russia’s Vladimir Putin.”

“Now I know this morning, some people are offended and upset that Ii interview Marine Le Pen and that we’re showing this interview on Remembrance Sunday,” he acknowledged. That said, he said that as a news program, “I don’t think the better way to honor the fallen is to fail to report on the next big challenge to Western security.”