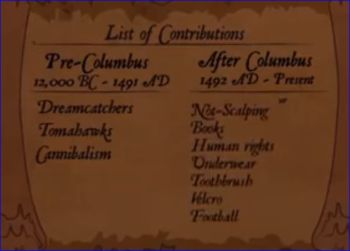 A screenshot from the now-deleted Daily Wire video

Conservative news and opinion site The Daily Wire published a video on Columbus Day that was widely slammed as racist.  The animated video listed dreamcatchers, tomahawks, and cannibalism as “contributions” from 12,000 BC to 1491, and a scrolling list of “contributions” after Columbus, including “not-scalping,” indoor plumbing, cars, iPhones, football, and The Simpsons. The video depicted Native Americans beheading someone, shooting arrows at people, and eating a human leg, but Christopher Columbus using a compass and hammer, eating with fork and knife, and pulling a cow. Nothing about Columbus forcing indigenous peoples into slavery.

Yesterday, Ben Shapiro, the site’s editor-in-chief, apologized and took down the video. In a statement on Twitter, Shapiro said the video was “bad satire” and “did not fulfill my editorial guidelines.” How so? He wrote, “It skipped over the grave injustices visited upon Native Americans, and it engaged in broad-based stereotyping.”

Shapiro added that he wasn’t involved and didn’t approve the video, which was posted when he was on vacation, and that he initially left it up out of “the benefit of the doubt.” Shapiro wrote, “That was a mistake, and I apologize fully for it.” iMediaEthics has tweeted Shapiro.

While the video was deleted, it was uploaded on YouTube.

Below see tweets about the video. One tweeter, Ben Norton wrote, “This white supremacist propaganda from @BenShapiro‘s rag The Daily Wire is completely indistinguishable from Nazi historical revisionism.”

My statement on the Columbus Day video that went up on Daily Wire's Twitter and Facebook yesterday. It has now been justifiably removed. pic.twitter.com/ja6h8cW2af