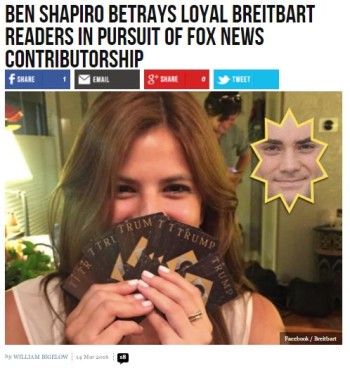 A screenshot of the now-unpublished Breitbart article.

In a statement on Breitbart’s website, Pollak confirmed he wrote the article, which he said was “an effort to make light of a significant company event.” Pollak said the article “was published as a result of a misunderstanding without going through the normal editorial channels” and apologized.

But, the byline on the article was “William Bigelow,” the name Shapiro’s father used when he wrote for Breitbart. Shapiro’s father, David Shapiro, used that pseudonym to protect against threats and online harassment, Politico reported. Like his son, he quit Breitbart last night.

“The fact they would use my father’s pseudonym in order to attack me just exposes how despicable they are,” Ben Shapiro told Politico. On Twitter, Shapiro doubted that Pollak actually wrote the article.

The now-unpublished article read in part:

The article accused Shapiro of having “apparently violated virtually every clause in his employment clause” and called him an “ambitious conservative gadfly, who is known to live on the edge, courting and then leaving a series of companies over the past several years.”

iMediaEthics has written to Pollak to ask how long the article was posted and about the use of Shapiro’s father’s pseudonym.