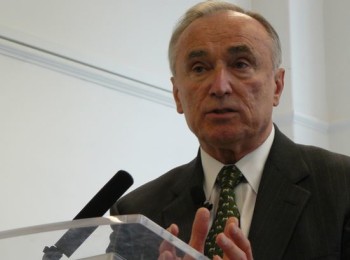 New York City police commissioner Bill Bratton wants The Guardian to retract an article that reported it’s hard for him to hire black NYPD officers because “so many of them have spent time in jail,” the New York Daily News reported.

The Guardian‘s June 9 story was headlined “NYPD chief Bratton says hiring black officers is difficult: ‘So many have spent time in jail.'”

The article states in part:

“Hiring more non-white officers is difficult because so many would-be recruits have criminal records, the New York police commissioner, Bill Bratton, has said.

“‘We have a significant population gap among African American males because so many of them have spent time in jail and, as such, we can’t hire them,’ Bratton said in an interview with The Guardian.”

Bratton has now said the article is “a total misrepresentation,” telling the New York Daily News:

“We’re asking, we’re not even asking we’re demanding, a retraction and a correction because the story was a total misrepresentation of the original story.”

“The original interview was done by one reporter and then they had a second reporter who took the first reporter’s story and totally misrepresented it in the second article.”

That first article was headlined “Life as a black cop: caught between love for the NYPD and the people they serve,” by Donna Ladd.

The Guardian told iMediaEthics by e-mail:

“The Guardian has a strong commitment to reporting about police practices in America. We stand by our reporting and our interview with Commissioner Bratton.”

“The quotes are accurate, but the context in which they’re presented gives the quote a totally different context,” the Guardian quoted Bratton as saying in a press conference.

“Stop, question and frisk is not preventing people from coming on the job,” Bratton is quoted as saying. “It’s not something that prohibits them. What it might do, however, because of a negative interaction with a New York City police officer – why would they want to become a New York City cop when they feel that they’ve been inappropriately dealt with in stop, question and frisk?”