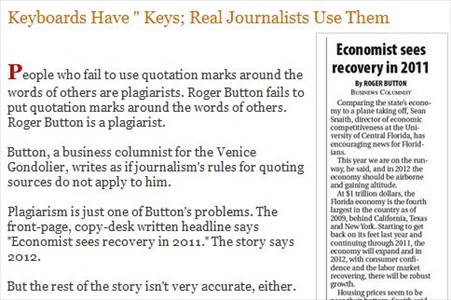 Old Word Wolf, a blog run by Marilyn Johnson Tarnowski, displays a graphic analysis of the plagiarism she claims to have found in the Florida newspaper, the Venice Gondolier Sun. (Credit: Old Word Wolf, Screenshot detail)

The Venice Gondolier Sun, a twice-weekly newspaper, has a circulation of about 13,500, according to Mondo Times.

Old Word Wolf, a blog run by Marilyn Johnson Tarnowski, also criticized Button for other inaccuracies in the story about economic recovery in 2012.  For one, the story addresses economics in the year 2012, even though the headline says 2011.  Also, Button reportedly “rounds” up  a statistic of “three-quarters of a trillion dollars” to “$1 trillion.”

Tarnowski explained in an e-mail to StinkyJournalism that she teaches at South Florida Community College and she subscribes to the Venice Gondolier Sun.  StinkyJournalism has also written to Button and the Sun. We will update after receiving any response.

According to Tarnowski, Button’s post borrows more than just facts from a report called the Florida & Metro Forecast 2010-2013 report, which was published Dec. 2010. (See the report here.)

To illustrate the alleged plagiarism, Tarnowski  published here a copy of Button’s article with highlighting on any information that matched the report.

For example, Button’s column and the report use the descriptions “harrowing plunge” and “robust growth.”  Both the article with Button’s byline and the Florida report included the following sentences and phrases:

Button wrote: “turn the state’s economy around, quite a task as Florida has been slow to recover from the recession.”

Thomas Keon, a dean at the University of Central Florida, wrote: “he promised to turn our state around if elected. As we know, that will be quite a task. Our state has been slow to recover from the recession.”

Tarnowski  also cited Button’s lack of proper attribution for a quote from University of Central Florida’s business school Dean Thomas Keon. Button did not indicate that the comment wasn’t from his own original interview.

iMediaEthics e-mailed Tarnowski  asking how she discovered the similarities between Button’s report and the UCF report.

“For several years now, I’ve been monitoring plagiarism and loosely related failures of journalism in its regional editions.  It’s a hobby,” Tarnowski wrote. She explained that she hasn’t contacted Button about her charges, but “Sitemeter.com indicates his office has viewed and downloaded the page.”

According to Tarnowski, the staff at the Sun is familiar with her blog and “tend to ignore” her writings. However, Tarnowski wrote that “several past” writers accused of plagiarism “suddenly stopped” writing following Tarnowski’s postings.

“To out them, I simply do an Internet search to locate and compare sources and reporters’ versions,” Tarnowski explained.  “I also have a pretty good ear for style changes and writing tics that often point to multiple writers (think cut-and-paste), unattributed sources and canned quotes.”

UPDATE: 2/2/11 11:50 AM EST: Bob Mudge, the editor of the Venice Gondolier Sun, wrote in an e-mail to iMediaEthics : “Ms. Tarnowski raised some important points to be reviewed with Mr. Button as well as our other correspondents on the use of press releases and reports.”

“Although I was a daily beat reporter (business, government, schools) over the course of ten years (Virginian-Pilot/Ledger Star in Norfolk, Va., and Key West Citizen), I haven’t had the opportunity to teach journalism.  My B.A., M.A. and almost-but-not-quite Ph.D. are in English literature and humanities studies, and I teach composition and humanities surveys at South Florida Community College. You can see a summary of my background at www.marilyntarnowski.com (click on the credentials tab) or identify the classes and courses via the college’s catalogues, online at www.southflorida.edu.”