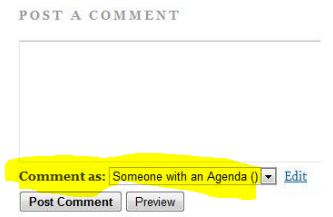 An Arizona blogger warned about 'astroturf' lobbyists commenting in news articles. Unlike the spoof comments section disclosure we made above, commenters are not required to reveal they were paid to push products or services in news sites comment sections.

It’s hard enough to tell the difference between editorials and advertorials. Indeed, in just the past few years, several cases have popped up where the public has been misled or deceived by information and articles crossing the line from editorial to advertisement. Now advertising promotional efforts, a blogger notes, are found slipping into the comments sections of news stories.

The blogger “Rynski” (real name: Ryn Gargulinski) wrote on Tuscon, Ariz., blog site Voice of Tuscon Sept. 30 that the public should be aware and on the watch for “astroturf” lobbyists, even in the news comments sections!

The lobbyists are paid to “create ‘fake grass roots’ campaigns full of phony supporters with an ulterior motive in mind,” Gargulinski wrote.  SourceWatch defines “astroturf” as a reference to “grassroots-based citizen groups or coalitions that are primarily conceived, created and/or funded by corporations, industry trade associations, political interests or public relations firms.”

Gargulinski highlighted news stories from across the U.S. about traffic cameras as having been subject to the lobbying. “These supportive comments, seemingly written by real-life citizens with real-life concerns, pop up like buffelgrass on traffic camera articles throughout cyberspace,” she wrote.

For an example of what to look for: Gargulinski reported that the comment–“Love them or hate them red light cameras work and the more they are debated the more people are aware of them. They should be at every intersection”–was posted under various “names” in news comments sections under reports “about photo enforcement cameras” on TusconCitizen.com, Florida’s SunSentinel’s site, New York’s WHEC site, and more.

This strange pattern of the same comment posted across the country indicates an astroturf campaign may be underway. In the case of the red light cameras, an industry or business has to supply the cameras, and cities reaps financial benefits from people caught violating the law via the camera. Advocating for the use of red-light cameras in news site comments sections can manipulate public opinion and lead to sales.

iMediaEthics has written to Gargulinski for comment and will update with any response.