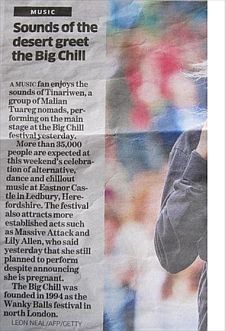 Blogger Kat Arney and online technology publication The Register both scanned in The Independent's brief on The Big Chill festival, which featured information likely from Wikipedia. (Credit: Kat Arney)

Is Wikipedia a legitimate source for news information?  The user-submitted and -edited website sometimes provides a comprehensive summary of an event or topic, but the site isn’t perfect, as a recent brief story in The Independent indicates.

The brief, published Aug. 7 in The Independent, was an advance story about The Big Chill music festival.  The story ended with this incorrect statement: “The Big Chill was founded in 1994 as the Wanky Balls festival in north London.”

However, The Big Chill was never named such. Blogger Kat Arney first spotted the error. Arney wrote that as a frequent participant of the festival, she knew that something wasn’t right with the story.  She checked out The Big Chill’s page on Wikipedia and discovered that someone had revised the page to say that The Big Chill was once the Wanky Balls festival.

Arney wrote that  “The Independent should check their facts a bit better.” The Register featured Aug 10 a screenshot of the article, which isn’t available online.

American Journalism Review’s Donna Shaw noted in 2008 that newsroom should be careful because “Wikipedia is maddeningly uneven.”  As in this case, while some articles are thorough, others feature jokes or pranks.

Regret the Error’s Craig Silverman referred to journalists being burned by Wikipedia sourcing as Wikiback effect – an abbreviation for Wikipedia gettting you back. In his 2009 article on Columbia Journalism Review’s site, Silverman referenced a spring 2009 incident when Irish student Shane Fitzgerald edited the Wikipedia entry for French composer Maurice Jarre.  Fitzgerald inserted fake quotes to Jarre’s entry just after the composer died, and watched newspapers in England, India, America and Australia publish the false information.

Silverman wrote that the Wikiback effect often catches lazy reporting.  He wrote that reading the site “for background” is fine, but you can’t use it as a source.

StinkyJournalism has written to The Big Chill and will update with any response.