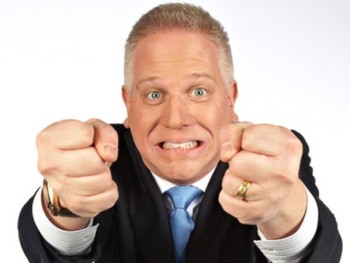 Glenn Beck is being sued for libel by college student Abdulrahman Alharbi, who was injured last year at the Boston Marathon bombing, the Boston Business Journal reported.

Alharbi’s lawsuit claims Beck “falsely identified” him as “an active participant” in the bombings.

The lawsuit identifies Alharbi as a 20-year-old Saudi Arabian national, who was injured while watching the marathon. It notes that Alharbi was “questioned by federal authorities” who also “searched his apartment” but was cleared from involvement with the bombings.

He is suing Beck, the news site he founded The Blaze Inc, and two radio companies — Mercury Radio Arts and Premiere Radio Networks.

What did Beck say?

In one of Beck’s segments, Beck suggested he had information to confirm his claim that “this Saudi national” is “a very bad, bad, bad man.”

“We know who this Saudi national is, and it is in your best interest and the best interest of integrity and trust for the people of United States of America, it’s best coming from you, not coming from a news organization. It’s best coming from you. You have until Monday. We have information on who this man is, and listen to me carefully, in your little event world, we know he is a very bad, bad, bad man. I know that doesn’t make any sense to you right now but on Monday it will. it makes sense to somebody in Washington. i don’t bluff. I make promises. the truth matters.”

In the background of the segment was a large screen image of an April 18 Blaze story and a photo of Alharbi. Beck’s site The Blaze had  reported that its sources said Alharbi “was going to be deported.” The article stated:

“Immigrations and Customs Enforcement officials have denied the claims made by a Blaze source that the government was considering deporting Alharbi despite questions of his involvement immediately after the bombings.”

Below is video of that clip, via Right Wing Watch.

What the Lawsuit claims

The lawsuit claims Beck’s comments about Alharbi hurt his reputation because of the claims he was financially and personally involved in the attacks.

“Beck repeatedly questioned the motives of federal officials in failing to pursue or detain Alharbi and repeatedly suggested that Alharbi had engaged in wrongful and criminal activity that resulted in mass injury to others, but was being protected by the wrongly acts of others covering up those crimes on his behalf.

“Beck falsely accused Alharbi of being a criminal who had funded the attacks that took place at the Boston Marathon.”

The lawsuit further states that because of Beck’s comments, “Alharbi’s reputation has been substantially and severely damaged” and that he’s received threatening messages.

Boston Monthly reported more on how Alharbi’s interactions with the police following the bombings:

“Federal authorities questioned Alharbi, who was injured when the bombs went off near the finish line, as he walked to meet friends for lunch, while he lay in his hospital bed with minor injuries sustained in the attack. With permission from Alharbi, investigators raided his apartment in Revere to conduct a search.”

Boston Monthly also pointed to a May 2013 Islamic Monthly interview with Alharbi. The profile on Alharbi identified him as “a Saudi national who won a full scholarship from Saudi Arabia to study in America”

The Islamic Monthly reported that the New York Post was the first outlet that reported on Alharbi and the marathon with its April 15 story “Authorities ID person of interest as Saudi national in marathon bombings, under guard at Boston hospital.”

That referred to Alharbi as a “20-year-old suspect” who was a “Saudi Arabian national” and “under guard at an undisclosed Boston hospital.” The story didn’t name him, when iMediaEthics viewed it March 31.

iMediaEthics has reached out to Alharbi’s lawyer, Peter Haley, for comment. We have also written to Beck, the Blaze, and Mercury Radio Arts.