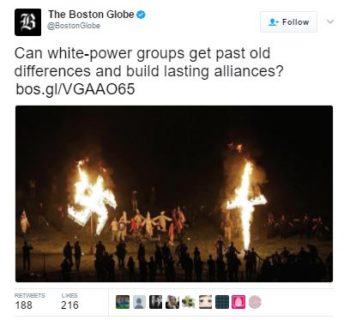 A Boston Globe April 30 tweet — “Can white-power groups get past old differences and build lasting alliances?” — was accompanied with a photo of a burning cross and a burning swastika, and later followed with an apology.

The Globe tweet linked to an Associated Press story on the newspaper’s website that was headlined, “With Trump in power, white-power groups try to build alliances.” That article reported on the alliances, merging and cooperation of various white power groups.

The original AP headline, “White-power groups banding together, but for how long?” and its text were published on the AP website April 25.  AP members have the option to write and append their own headlines to AP stories. The tweet was deleted after about eight hours and the Globe then posted an apology tweet an hour later, nine hours after publication of the original tweet:

Hello, we've removed an earlier tweet that didn't meet our standards, or those of our readers. We apologize, we'll do better.

The tweet appears to legitimize white power. They are a a viscous hate group and should be treated as such.

did @BostonGlobe really just write a "why all white power groups should band together & cant we all just get along" https://t.co/XYp5IfIUkm

iMediaEthics wrote to the Boston Globe to ask more about the tweet’s deletion. Katie Kingsbury, the Managing Editor for Digital at the newspaper, told iMediaEthics by e-mail that the tweet was removed because it was “too flippant” and said the story the tweet linked to is “an important news story.” She wrote:

“First off, let’s be clear: This was, in no way, a ‘white power’ tweet, as you say. It was a link to an Associated Press story that ran on our site and elsewhere about white nationalist groups working to consolidate forces in the Trump era, an important news story. Nothing in the story or in the tweet advocated ‘white power.’ We removed the tweet because its language was too flippant for a subject as serious as white nationalist groups, and we apologize for that — but there was no support for ‘white power’ there.”

The tweet was deleted a little more than eight hours after it was posted, she explained. “The tweet went out shortly after midnight and came down roughly 8:30am. We issued the apology at 9:27am,” Kingsbury wrote.

“The reason for the gap between deletion and apology was to go back and find out what happened, as much as we could this morning, before crafting our apology,” Kingsley explained. “This was a serious error in judgment, and that tweet did not meet our standards. We will do our best to make sure it doesn’t happen again.”

Take down "that" headline @BostonGlobe white power and nazi groups are terrorist groups. Not some casual political alliance.

Did you predict that your own paper would start promoting unity among white power groups, @BostonGlobe?

Why not just use the actual headline for this? "With Trump in power, white-power groups try to build alliances"

@BostonGlobe just wondering who okd the article about the white power groups. Burning crosses on my timeline.

They should be fired.