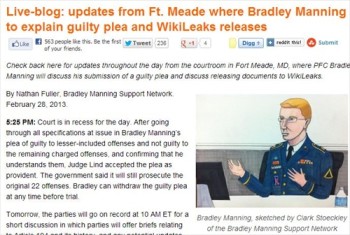 Bradley Manning has long been suspected as WikiLeaks’ source for thousands of U.S. government documents including the so-called Afghan War Diaries and Iraq War Diaries.

And Manning confirmed those suspicions today when he “confessed in open court” to willingly providing WikiLeaks with leaked documents and videos including what WikiLeaks dubbed “Collateral Murder,” NBC News and  the New York Times reported.

“No one associated with [WikiLeaks] pressured me into sending any more information,” Manning is quoted as saying after pleading “guilty to 10 criminal counts in connection with the huge leak.” NBC News added that Manning said he wanted to “spark domestic debate” with the leaks.

According to the New York Times, Manning still faces charges “including aiding the enemy” and “violating the Espionage Act.”

Manning, who got the documents when he was working as an “Army intelligence analyst,” noted that before turning the documents over to WikiLeaks he considered giving them to well-known news outlets the Washington Post, The New York Times and Politico but decided against it. The New York Times ended up on a list of select news outlets given an advance look at some of WikiLeaks’ documents dumps before WikiLeaks published.  As iMediaEthics wrote earlier this year, military prosecutor Capt. Angel Overgaard said that Manning would still be charged had he hypothetically given the documents to the Times directly.