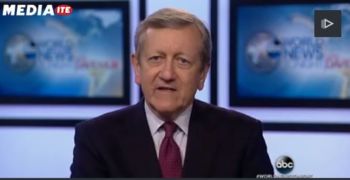 ABC News inaccurately reported that Donald Trump, as a presidential candidate, asked Gen. Michael Flynn to contact the Russians. The claim was made based on only one anonymous source. But, as ABC News later corrected, its source actually claimed that Trump was president-elect when he made the request.

“We deeply regret and apologize for the serious error we made yesterday. The reporting conveyed by Brian Ross during the special report had not been fully vetted through our editorial standards process. As a result of our continued reporting over the next several hours ultimately we determined the information was wrong and we corrected the mistake on air and online.

“It is vital we get the story right and retain the trust we have built with our audience – these are our core principles.  We fell far short of that yesterday.  Effective immediately, Brian Ross will be suspended for four weeks without pay.”

ABC News’ Brian Ross made the error during a morning broadcast on Dec. 1; during the evening broadcast of ABC News’ 6:30 p.m. show, World News Tonight, Ross clarified that his source actually said it was when Trump was president-elect and was no longer a candidate. Later, ABC News called the clarification a correction, CNN reported.

“The initial report, based on one anonymous source, prompted a dramatic reaction in the financial markets, and the Dow fell more than 350 points,” CNN reported. “Stocks largely recovered later in the day.”

“A clarification tonight on something one of Flynn’s confidants told us and we reported earlier today. He said the president had asked Flynn to contact Russia during the campaign. He’s now clarifying that saying, according to Flynn, candidate Trump asked him during the campaign to find ways to repair relations with Russia and other world hot spots. And then after the election, the president-elect asked him to contact Russia on issues including working together to fight ISIS.”

Calling the correction a clarification prompted criticism, CNN reported, and a few hours later, ABC News tweeted calling it a correction. That correction is also appended to the bottom of ABC News’ Dec. 1 online story about Flynn. Ross hasn’t appeared to tweet about the error.

The text of that correction reads, “During a live Special Report, ABC News reported that a confidant of Lt. Gen. Michael Flynn said Flynn was prepared to testify that then-candidate Donald Trump instructed him to contact Russian officials during the campaign. That source later clarified that during the campaign, Trump assigned Flynn and a small circle of other senior advisers to find ways to repair relations with Russia and other hot spots. It was shortly after the election, that President-elect Trump directed Flynn to contact Russian officials on topics that included working jointly against ISIS.”

CORRECTION of ABC News Special Report: Flynn prepared to testify that President-elect Donald Trump directed him to make contact with the Russians *during the transition* — initially as a way to work together to fight ISIS in Syria, confidant now says. https://t.co/ewrkVZTu2K pic.twitter.com/URLiHf3uSm