BRING ON THE BILLIONAIRES: What about selling the Tribune to Rumsfeld? 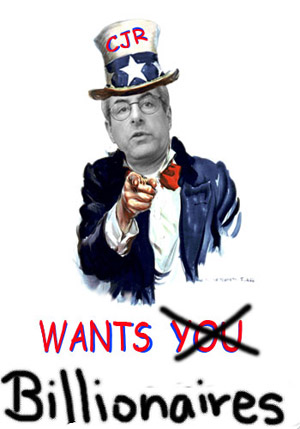 Would the mighty Tribune News Company, owner of 23 television stations and 11 big market papers across the country, be better off in the hands of wealthy private owners?

The Columbia Journalism Review thinks so.

After comparing the publicly traded news company to the disgraced former Secretary of Defense, Donald Rumsfeld, CJR offered this bit of analysis:

“Tribune has great resources, but those resources aren’t doing much public good. The company seems less than the sum of its parts. And so, like Rumsfeld, it should go. We’ll take our chances with the gaggle of billionaires who are lining up to buy those newspapers,” CJR wrote.

Rumsfeld? Billionaires? I couldn’t believe my eyes. I called CJR executive editor Michael Hoyt to find out if I had missed something. He began by recounting his early days in the news business. “Before public companies largely swallowed up newspapers, there were individual owners mostly. It wasn’t always the good old days,” he said. “But many of the [private owners] were very civic-minded and very good.”

His first job was at a small, privately owned paper that was later snapped up by the Gannett news chain. “[Before the buyout] it was very good. Now it’s mediocre,” he said. The problem, he says, is that in a transitional period, public companies often protect their bottom line by making wide-scale cuts. This is exactly the wrong tack for newspapers, says Hoyt, which are in a transitional period that demands heavy investment. “A private owner would be insulated from the pressure of constantly rising Wall Street expectations,” said Hoyt.

Would any old media mogul do? How about another Rupert Murdoch?

“Rupert Murdoch loses money every year on the New York Post but keeps it alive and healthy, so why not?” Hoyt replied by email. “If I get to pick my billionaires, I would prefer [those] who understand the value of fair and balanced journalism, and will keep their personal interests out of the newsroom. If they can do that, and invest in the quality of the product, I don’t care who.”

Rick Edmonds, media business analyst from Poynter.org, says the solution will require more than courting ultra rich private investors. Like Hoyt, he says it’s still not too late for newspapers to invest and adapt to the changing market. Unlike Hoyt, however, he points to precipitously dropping advertising revenues and the uncertain returns on investment as key problems. “By and large newspaper companies are generating enough of a cash flow that they do have available money to invest,” he said. “What’s tricky about the whole thing is that there are no sure bets.”

Private ownership is not a silver bullet, says Edmonds. “Private companies face some of the same pressures as public companies,” he said, pointing to tough decisions the Philadelphia Media Company was forced to make months after purchasing the Philadelphia Inquirer. The private firm cut 20 percent (68 jobs) of the Inquirer’s newsroom staff after posting steep third quarter losses. The financial difficulties of large newspapers, he says, is directly attributed to huge losses of advertising revenue. “The billionaire rescue scenario has not really been tried,” said Edmonds. “It’s a very difficult business and it’s not clear that people coming in from the outside are going to be more successful than people who know it well.”

Edmonds also said that much of the ill-will among journalists and analysts stems from a perception that Tribune has not articulated a clear, long-term plan for the future. “It isn’t, at this point, just about profit margin, it’s about whether you seem to be proactive about getting to the future,” he said. “I don’t think Tribune scores very well on that parameter.”

Bob Giles, curator of the Nieman Foundation for Journalism at Harvard University, echoed Edmond’s sentiments about the loss of advertising revenue and risk averseness of newspaper companies. He also said that one of the pitfalls of private ownership can be illustrated by the small, private papers that Hoyt used as models for private ownership. “You have to recall that in the days when private ownership was the rule, a lot of small town papers were badly run,” said Giles. “Some owners were involved in local politics or had ties to the business community.” When these small papers were bought out by public companies like Knight and Gannett, however, journalistic standards and integrity often improved markedly, he said.

The Tribune Company did not return our calls for comment, but had its own take on the CJR piece. On Poytner’s Romenesko site, it fired back with a 1000-word rebuttal. The letter’s author, Gerould Kern, vice president of Tribune Publishing, said that CJR’s article was “misinformed, misguided and a disservice to to [its] readers, our company and our communities.” Kern ducked the billionaire quip and instead presented a disembodied overview of the company’s financials and a list of feature articles published by its papers with distinctly public service themes—causes of teen driving deaths in Illinois, the decline of a neighborhood in Baltimore, the mismanagement of a kidney transplant program in California.

“That was kind of a softball for them,” said Hoyt. “They do a lot of good. Obviously there are still big institutions that do great journalism.”

I asked Hoyt if CJR had overstepped on this one. Why, for example, hadn’t CJR anticipated and contextualized Tribune’s simple rebuttal that it employs 3,700 journalists and invests $400 million in its newsrooms across the country? He said that space constraints and CJR’s past coverage of the issue released them from any obligation to cite specifics in this article. “I think that people who keep up with us know that they’ve been cutting at every newspaper,” he replied. He also accused the Tribune of not being “100 percent intellectually honest” in its claim that CJR was attempting to misrepresent its commitment to public journalism.

But to accuse Tribune of lacking intellectual honesty in its response seems, itself, a kind of intellectual dishonesty—especially since CJR offered nothing in the way of evidence to qualify its own assertions.

What’s certain is that CJR’s article inhabits a universe of generality. That doesn’t cut it here. It’s common sense to imply that when media owners begin hacking at editorial budgets they run the risk of harming the journalism they are producing. CJR’s mention of the inherent conflicts between fiduciary and editorial responsibility is well taken but certainly not news.

CJR should have shown clearly that the Tribune is already operating at the editorial margin and that any reduction in editorial budgets would plunge it into the toilet. When you call for a complete overhaul of a company as entrenched (see above) and decorated as The Tribune (recipient of 100 Pulitzers since 1931) you’d better have some pretty substantial and targeted evidence to back your allegations.

CJR did not. (Tribune also missed a golden opportunity to answer its critics and articulate a clear plan for the future.)

CJR’s solution, empty of substance, doesn’t do much public good.

Who are these “civic-minded” billionaires CJR speaks of? Take a look…

And for a list of potential buyers, see Forbes’ World’s Wealthiest People.

April 25, 2007
We regret the error:
“After comparing the publicly traded news company to the disgraced former secretary of state, Donald Rumsfeld, CJR offered this bit of analysis“.. should have been stated “former Secretary of Defense, Donald Rumsfeld” >

BRING ON THE BILLIONAIRES: What about selling the Tribune to Rumsfeld?