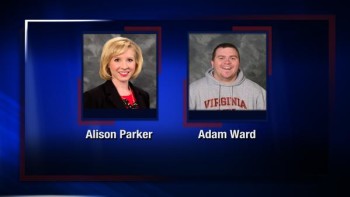 Flanagan shot himself when tracked down by police today, but was taken to the hospital, NBC News reported. “WDBJ7, the outlet that the victims worked for, has cited state police in retracting its report that Williams/Flanagan died of a self-inflicted gunshot wound. He is said to be in critical condition,” Slate reported. Flanagan died at the hospital.

“During the police chase, Flanagan apparently posted videos of the shooting to Facebook and Twitter accounts under the name Bryce Williams. Those accounts were quickly taken down,” according to NBC News.

“This kind of loss will resonate in these halls for a long, long time as we remember in their short lives what dedicated journalism they produced and what outstanding journalists they were,” WDBJ7’s Marks said, according to USA Today. “They were just out doing their job today.”

CNN posted video of the on-air report when Parker was shot with the warning about it having “Graphic content.” The video shows the camera drop as Parker screams and the gunman walking toward her.

Vicki Gardner, the woman Parker was interviewing when she was shot, was also shot, but “is in stable condition after surgery,” Slate reported.

WDBJ has posted a collection of condolences on its website.

UPDATED: 8/31/2015 : See iMediaEthics’ commentary on the New York Daily News’ front page image from the murder video, which included a photo of Parker just before being fatally shot.  Also check out our reporting on the media coverage of the videos.