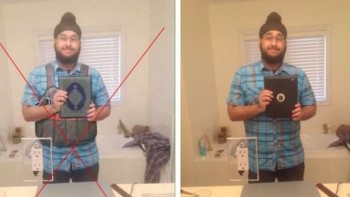 The fake photo (left) with the original (right) (Photo via Grasswire)

A Canadian man, Veerender Jubbal, was victimized online when someone Photoshopped a selfie of him and claimed he was one of the suicide bombers responsible for the attacks on Paris Friday night. Making it worse, a pro-ISIS Twitter account re-tweeted the fake photo and the Madrid, Spain newspaper La Razon published the picture on its front page.

La Razon has apologized – on Twitter- for its serious error.

How did this all go so terribly wrong?

Back in August, Jubbal posted a selfie of himself in the bathroom. See it below. Jubbal, who is Sikh, identifies himself on Twitter as a freelance writer and journalist as well as an opponent of the GamerGate movement.  (For a brief overview of Gamergate, see our July story.)

BuzzFeed pointed out several red flags that the photo was suspect. See below: 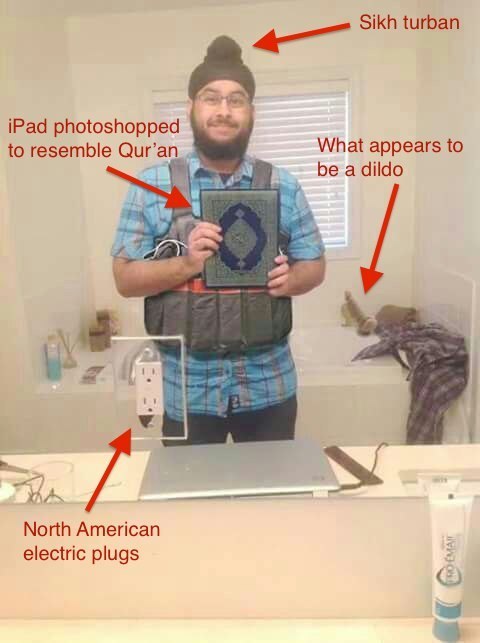 BuzzFeed pointed out several areas of the photo that should have raised red flags.

La Razon posted an apology on its Twitter writing:

“The image was even shared by one of the largest — though unofficial — pro-ISIS channels on Telegram, the app that the extremist group used to take credit for the attacks in Paris,” BuzzFeed added.

For his part, Jubbal’s been posting a lot on Twitter to respond to the misidentification and Photoshop.

Be sure to read this thread, if you have not, please. I am trending in numerous countries around the world, as well.

Below is a selection of his tweets explaining his thoughts on this:

In gauging this entire incident–millions upon millions of people have seen the photoshopped images, and have placed me as a terrorist.

I hope everyone has caught up with what is going on with me. I went viral due to a photoshopped image claiming I am a terrorist.

This image has been used, and placed on the front page of a major Spain newspaper–putting me as one of the people behind terrorist attacks.

People are editing, and photoshopping my selfies as if I am one of the people causing the issues/problems in Paris. — Veerender Jubbal (@Veeren_Jubbal) November 14, 2015

This image has been used, and placed on the front page of a major Spain newspaper–putting me as one of the people behind terrorist attacks.

Well, just got a phone call from a cousin in India, and they know about it; and saw the whole thing in India Times. We might sue, I guess. — Veerender Jubbal (@Veeren_Jubbal) November 15, 2015

You can all check the last retweets. Let us start with basics. Never been to Paris. Am a Sikh dude with a turban. Lives in Canada.

iMediaEthics has reached out to Jubbal on Twitter, but he noted in a tweet earlier that he was swamped with requests.
Hat Tip: Zeynep Tufekci