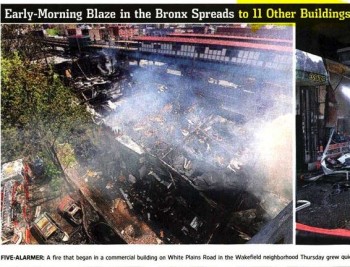 Wall Street Journal headline --"Early Morning Blaze in the Bronx Spreads to 11 Other Buildings, Knocks Out Subway Service"-- on top of two images, print version of May 2 story. Problem was there were 7 buildings involved in the fire according to the forthcoming fire report, not 12.

It is easy to critique the media for errors during national breaking news like the Boston Marathon bombing, but what about daily local coverage?

An iMediaEthics fact check of stories about a recent fire in the Bronx, New York, shows the same level of failure in local coverage as was found in the national event.  Contradictory facts from multiple media outlets about the same local five-alarm fire only reinforces the identical need for greater care from all media beats — local to national.

These types of errors — conflicting details of the same incident — show up in the local media too frequently.  This week, iMediaEthics focused on a May 2 five-alarm blaze in the Bronx, a local news event about which many news outlets reported.

In a major fail, not one outlet iMediaEthics examined had reported the correct number of buildings that were on fire.  How hard can that be?

The Wall Street Journal headline originally reported the blaze “spread to 11 other buildings” in the Bronx. Later in the online story, the WSJ headline suggested a different count, with the fire  “Spreads to a Dozen Buildings.”

To add to the confusion, The New York Times reported that “11 businesses” were damaged or destroyed.  As multiple businesses were in the same building, the Times’ figure wasn’t useful in determining how many buildings burned.

CBS New York Channel 2 weighed in by reporting that the fire “destroyed several buildings.” But the local afilliate reported “at least eleven buildings caught fire” in the same article. Reuters stated over the wire that the fire “raced through eight buildings.”

So which is it? Three, eight, eleven, twelve or thirteen buildings? It is a distinction with a major difference.

“One building was a taxpayer [type] and it had eight separate addresses for eight occupancies. But it’s one building.” Long told iMediaEthics there were thirteen businesses damaged or destroyed.

iMediaEthics asked Long if there were any follow ups from the media regarding the conflicting number of destroyed buildings or businesses. According to Long, “preliminary information” had gone out, as is usually the case, over the radio. It needed to be verified.

Here’s a roundup of the varying numbers of buildings and businesses reported by an array of media outlets:

Earlier this year, iMediaEthics fact checked the New York Daily News and New York Post’s conflicting reports about a teacher who allegedly had an affair with and became impregnated by a student. We ended up filing a Freedom of Information request to find out which outlet’s facts were correct. Check out the results of our investigation.

Full disclosure: A close family friend of the author is a member of the FDNY staff chiefs.

UPDATE: 7:37AM EST:   WPIX-TV Channel 11 reported : “The fire started in a garage and spread to several other buildings including a five-story apartment building. Nearly a dozen cars were also reportedly on fire.” James Long, FDNY’s public information director told iMediaEthics that “three vehicles,” not a dozen cars, burned.