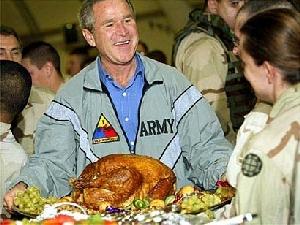 Throughout the Internet, you find the original charge by the NY Times that Bush's turkey for the troops was "fake"--if after they did a correction. Errors live like zombies --forever--on the Internet.

Media errors are like Pandora’s Box or the genie in the bottle, once an error is out in the Internet,  it is very difficult , if not impossible, to “take it back” even after it’s been corrected. Take, for example, the case of The New York Times correction regarding then President Bush’s alleged fake turkey tray for US troops.

The New York Times did a correction but the false report –like the living dead– still persists on the BBC web site, just as if no correction  ever was made.

A simple Google search shows the error is not just stuck as if the undead on BBC, but a virtual horror feast of repetitions that the turkey is “fake” continues in brut force.

Who is responsible for cleaning up the mess?