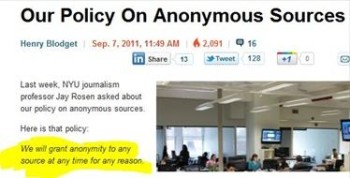 Does Business Insider have one of the most lax anonymous source policies?

The business news blog’s CEO,  Henry Blodget, revealed in a Sept. 7 post its anonymous source policy. According to Blodget, the disclosure was prompted by questions from NYU’s Jay Rosen. The policy, according to Business Insider, is:

“We will grant anonymity to any source at any time for any reason.”

Blodget told iMediaEthics by e-mail that “the policy has been in place internally since we launched the site four years ago,” but it hadn’t been published until this week.

Business Insider defended its broad policy by claiming that sources will provide more information in interviews if the site offers an easy promise of anonymity.

Journalism ethicists ordinarily call for sources to be named or, if granted anonymity, for the publication to provide information about why the anonymity was granted, why the person knows that information, and if that person has any motives or agenda.  The Society of Professional Journalists’ code of ethics, for example, advises: “Identify sources whenever feasible. The public is entitled to as much information as possible on sources’ reliability.”

Business Insider rationalized that “on the ‘beat’ we cover–business–we can be much more valuable to our readers if we are willing to grant anonymity freely.”  And, business sources almost always are instructed against media interviews, according to Busines Insider.

Regarding hidden motives, Business Insider’s Blodget suggested that sources can twist information both on and off the record.

And Business Insider added that it would try to provide information about a source’s background to help readers, but essentially, Business Insider called on readers to “trust” the site’s “judgment and reporting.”

“As I mentioned in the post, some readers prefer sources to be named. We understand this view, but in our area of expertise–business–we think a requirement that everyone we talk to be on the record would vastly restrict the amount of information we can gather and report. We also think it would often prevent us from telling the real story.”

One reader, “Toddd” commented that the lax anonymity guidelines let the site fabricate information, which Business Insider’s Henry Blodget denied in the comments section, arguing that even if the site’s reporters did fabricate, “we’d be outed by the industry and our readers pretty quickly.”

“We treat all information we get on a case-by-case basis. We are as straightforward as possible with readers about where the information came from and how confident we are that it is accurate. We do not state as fact something that we haven’t confirmed is fact. (If we’re reporting a ‘version of the story according to…’, we say that that’s what it is.)”