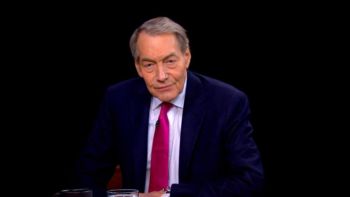 CBS News, PBS and Bloomberg suspended Rose and his program immediately after the allegations were published, as iMediaEthics reported last night. At CBS News, Rose co-anchored CBS This Morning and contributed to 60 Minutes.

In a statement on Twitter from CBS News president David Rhodes, the firing was announced “effective immediately.” Rhodes called the allegations against Rose “extremely disturbing and intolerable behavior.””

“Despite Charlie’s important journalistic contribution to our news division, there is absolutely nothing more important, in this or any organization, than ensuring a safe, professional workplace — a supportive environment where people feel they can do their best work. We need to be such a place,” he said.

Last night, Rose admitted he “behaved insensitively” but claimed that he “always felt that I was pursuing shared feelings.” He also said “I do not believe that all of these allegations are accurate.”

iMediaEthics has written to PBS and Bloomberg to ask if they have any updates in their response to the allegations against Rose.

On CBS This Morning this morning, Norah O’Donnell said “There is no excuse for this alleged behavior” by Rose and “this will be investigated,” the New York Daily News reported.

My statement in full. pic.twitter.com/3kvFrqF2dT