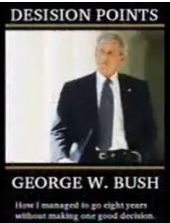 CBS News reportedly aired a faked book cover "for a fraction of a second" during a feature on book covers. (Credit: CBS News, YouTube, screenshot detail)

The doctored cover was reportedly aired “for a fraction of a second” during a feature on book covers.

Fox News reported that CBS addressed the hoax, calling it a “mistake.”  CBS reportedly stated “you’d have to freeze the frame to notice” the error.

“Clearly we have to be more careful when downloading material.”  iMediaEthics previously has written about the plagiarism claims against Bush’s Decision Points here.